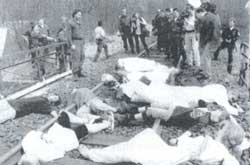 ANTI-NUCLEAR feelings ran high in northern Germany, when a 40-tonne shipment of-plutonium and nuclear waste recently arrived at the Gorleben nuclear storage 0ant near Hanover. A series of clashes between protesters and armed policemen left several injured and reopened the old disputes about the country's nuclear policies. The shipment of reprocessed nuclear waste escorted by 15,000 policemen and armoured cars arrived at the Gorleben plant from the French reprocessing unit at La Hague. The protests turned so violent that police said the scene resembled a civil war.

The opposition party, Greens, condemned the transport as a 'provocation' and called for an end to the shipments. Angela Merkel, the environment minister, defended the government saying that there was "no alternative" to the shipment. It was the first of around I 10 cargoes bringing nuclear waste and fuel back to German reactors over the next eight years. The waste was collected from German nuclear power plants and sent to France for reprocessing. But French law decrees that all foreign nuclear material reprocessed at La Hague has to be returned to its country of origin.