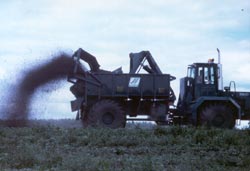 The Washington dc-based National Research Council's committee on toxicants and pathogens in biosolids (solid organic matter recovered from sewage treatment) has recently come out with its report. The report, Biosolids applied to land: Advancing standards and practices, questions the very basis of the us Environmental Protection Agency's (epa) standards on application of sewage sludge to land.

It urges that epa standards, notified in 1993 under the Clean Water Act as the Code of Federal Regulations, Title 40 (Part 503), commonly known as the part 503 rule, need to be reviewed.

Thanks to the 1992 prohibition on disposal of sewage sludge in oceans, roughly 60 per cent of the 5.6 million dry tonnes of biosolids, high in organic content and plant nutrients, are diverted to farmlands as fertiliser.
However, biosolids could contain pollutants from household, commercial and industrial wastewater with organic contaminants (such as pharmaceuticals), inorganic contaminants (metals and trace elements) and pathogens (bacteria, viruses and parasites). Worse still, after wastewater treatment concentration levels of some pollutants in the sludge increase. Depending on the extent of treatment, biosolids may be applied on areas with limited public exposure, such as farms, or with more treatment on public sites, such as parks, golf courses and lawns. Of late, public health concerns regarding the use of biosolids are growing, especially from citizens living near application sites.

Ellen Z Harrison of Ithaca-based Cornell Waste Management Institute points out (Land application of sewage sludges: an appraisal of the us regulations; International Journal of Environment and Pollution, Vol 11, No 1; 1999) that the current us federal regulations are not adequately protective of human health, agricultural productivity or ecological health.

The part 503 rule establishes minimum standards that must be met if sludge is to be land-applied. The regulation includes concentration limits for nine metals and pathogens, and requires that flies and rodents are not attracted to the site. Of its adequacy, the nrc report says, "...the committee found the technical basis of the 1993 chemical standards for biosolids to be outdated. epa has not re-evaluated its chemical standards...well over a decade. There have since been substantial advances in risk assessment, new concerns about adverse heath outcomes and chemicals not originally considered." The report has been forwarded to epa for action.

nrc had been commissioned by epa to conduct an independent review of the technical basis of chemical and pathogen regulations for biosolids. The study focussed on human health alone. The report points out, "(There is a) critical need to update the scientific basis of the part 503 rule to ensure that the chemical and pathogen standards are supported by current scientific data and risk-assessment methods; to demonstrate effective enforcement of the part 503 rule; and validate the effectiveness of biosolids-management practices."

While epa defines biosolids as primarily organic solid product yielded by municipal wastewater treatment processes that can be beneficially recycled, the nrc report defines it thus: sewage sludge that has been treated to meet land application standards in the part 503 rule. When these biosolids are not applied to agricultural or other lands, they are landfilled or incinerated. At present, the part 503 rule places pollutant limits on arsenic, cadmium, copper, lead, mercury, molybdenum, nickel, selenium and zinc. Chromium was deleted from the regulations in 1995.
The nrc's recommendations cover three broad categories: health effects, chemical standards and pathogen standards. Says Thomas A Burke, chairperson of the committee on toxicants and pathogens in biosolids applied to land, "This report offers numerous recommendations to update and strengthen the scientific credibility of the biosolids regulations and ensure their consistent implementation." He asserts that there is a need to update the scientific basis of the part 503 rule. Some overarching recommendations of the committee:

• A new national survey of chemicals and pathogens in sewage sludge.

• A framework for an approach to implement human health investigations.

In the us there is pressure to review existing standards. What about India? "Although we have no standards for land-application, we do have standards for the compost that is made out of sludge," says Dilip K Biswas, chairperson, Central Pollution Control Board (cpcb), Delhi. Until such time as standards are notified, Indian soil will continue to be poisoned by application of pollutants.

This report can be downloaded from:
http://www.nap.edu/catalog/10426.html