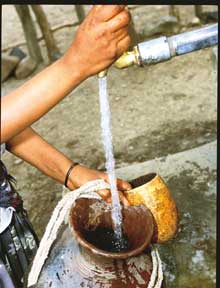 Some development projects can cause collateral damage. A paper published in the Public Library of Science Medicine (14 February) cites one such example: a project that provided tap water to remote communities in Southern Ethiopia. The local women used to trudge for six hours daily to get water but after the introduction of tap water, the task took a quarter hour. Researchers found that the women ended up with more energy and time to give birth to more children.

Problems continued: the food supply remained unchanged, which is why food had to be spread very thinly across the burgeoning population. Therefore, introduction of the taps translated into higher infant mortality and more children with poorer nutrition. The values perpetuated in the communities specified that larger families were better, the reason for the lack of family planning. In the study, the researchers highlighted the need for development programmes to be multi-sectoral, such as by promoting contraception in addition to their primary goals.