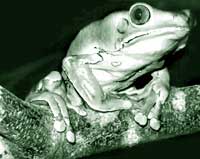 a team of biotechnologists in Canada has chanced upon a new use for the skin secretions of a rainforest frog: protecting potatoes against pathogens.

Endemic to Brazilian and Peruvian forests, the Giant Waxy Monkey Tree Frog (Phyllomedusa bicolour) secretes chemicals called dermaseptins (most potent being the one called b1) from its skin to ward off the bacteria and fungi thriving in the hot and humid rainforest. Peruvian Matses Indians have used these secretions in Shamanic Hunting Practices for years to induce effects such as increasing physical strength and resistance to hunger and thirst.

Scientists from the University of Victoria, led by Santosh Misra, found that inserting a modified frog gene into a potato induces the latter to produce b1. This made the crop resistant to an "unusually broad-spectrum" of pathogenic bacteria and fungi, including those causing diseases such as late blight, dry rot and pink rot. The dermaseptin also markedly extends the storage life of potatoes by protecting against the bacterium Erwinia carotovora . The findings were published in the journal Theoretical and Applied Genetics (Vol 111, No 4, August, 2005).

The same method could, theoretically, be used in tubers around the world to make them immune to certain common diseases. However, it is still to be seen if b1 is benign to humans, especially in cumulative doses.