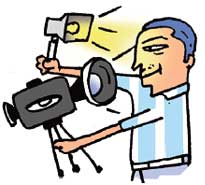 In mid-October, two dozen young slum dwellers in a Buenos Aires slum began filming a documentary about themselves, in an attempt to break down the negative stereotypes with which the media portrays them.

Kids Filming: We Are Not Dangerous; We Are in Danger is being shot in La Cavathe slum has an image of being a den of juvenile delinquents and drug addicts; media coverage has exacerbated that reputation. People think were all drug addicts and delinquents in La Cava, said one of the budding filmmakers, 16-year-old Melina Martnez. But there are people here who go to work every day at 4 am.

The project emerged from the activities of the non-profit Youth Employment Civil Associ-ation, which is working with adolescents and young adults since 2005. The initiative for the film emerged in a communications workshop, where the young participants complained about the widespread prejudice.

The films director, Miguel ngel Domnguez, said the film will show how the rights of young slum dwellers are infringed.