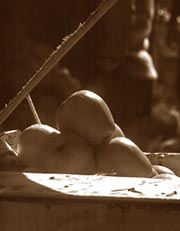 scientists have developed a technique to increase the shelf-life of apples to eight months. Normally, apples remain unspoilt for four-five months when cold-stored at about 4c. "Our technique will help in reducing the spoilage, making the fruits available during off-season and fetching farmers a better price," says R K Khandal, director of the New Delhi-based Sri Ram Institute (sri). Currently, about 20-30 per cent apple yield is wasted due to spoilage.

sri's researchers used gamma radiation to develop their method. The radiation slows down the process of ripening by reducing the levels of the fruit's enzymatic reactions.

The institute has submitted data on the technique to the Union ministry of health, seeking inclusion of apples in the list of items on which radiation can be used. A memorandum of understanding has also been signed with the State Bank of India for a one-year pilot study on acceptability of irradiated apples. The study would be conducted in Himachal Pradesh -- the largest producer of apples in the country.