Fruits and vegetables in Pakistan are laced with pesticides 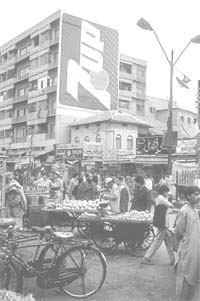 PEOPLE living in the cities of Pakistan are consuming fruits and vegetables heavily contaminated with pesticides, says Inayatullah Chaudhry, advisor for sustainable development at the United Nations' Development Programme (undp) in Islamabad.

The government has never shown any inclination to address the issue, but it may soon be forced to do so. New quality and environmental standards, which are becoming mandatory under the World Trade Organisation (wto), are forcing the government to get its act together.

The United Nations' Economic and Social Commission for Asia and Pacific (unescap) defines pesticide residue as that fraction of a pesticide which, as a result of its practical use, has found its way into the produce or soil and is present either in the form or a parent compound, or significant degradation products.

The problem of pesticide residues in fruits and vegetables is a fallout of the environmental havoc created by pesticides. "Orchards and vegetables are now coming under severe pest attacks by formerly harmless creatures. This is providing an incentive to farmers to increase spraying," says Wali Muhammad Chaudhry, professor emeritus of entomology at the Agricultural University of Faisalabad.

Pesticide residue analysis is a specialised field requiring highly trained technicians and expensive laboratory facilities and regents. "A single test to check residue of one pesticide costs around Rs 5,000 in chemicals and regents alone," says Yusouf Hayat Khan of NARC.

"Farmers even spray vegetables after harvesting so as to force pests inside not to peep out and reduce the market price," says Siddique Hamdard, chief pesticide analyst at the Ayub Agricultural Research Institute, Faisalabad.

There is an urgent need to regulate the use of pesticides on vegetables and fruits. Most vegetable crops are productive for up to three months during the season. They are often harvested on a daily basis, and in many cases are sprayed almost daily to keep pests under control.

Pesticides may remain on a crop for some time after application. This is often desired to protect it from pests in the field and during transport or storage. However, using pesticides too close to crop harvest or sale leads to excessive residue levels.

"Farmers even spray vegetables with pesticides the night before they are harvested and send them to the city," says Saif Khalid, a virologist at NARC, Islamabad.