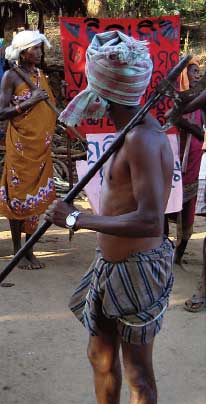 An official of Orissa's cashew development corporation got a rude shock when he entered Hantalpur village of Koraput district on February 6. He wanted to persuade the people to bid for the cashew harvesting contract being auctioned by the corporation. It infuriated the women of the village so much that they tied up the official. "We told him if the corporation wanted it could cut and take away the trees but the land would remain ours. When he did not listen to us we tied him to a post. He was released only after he promised never to come again to the village, let alone talk about auctioning," said Subarna Hantal who led the women. Batti and Rukmini of the village said they had been harvesting the fruits in the plantation near the village since 2003 against the corporation's wishes. "We are not afraid of arrest," they declared.

Tribals and dalits in Orissa have turned the tables on the Orissa State Cashew Development Corporation (oscdc), which controls 30690.5 hectares (ha) of cashew plantations and has been auctioning the harvesting contracts for nearly three decades. First the people began to demand rights over the plantations, then they resorted to open defiance. In the past few years they subverted the corporation's auctioning process and began harvesting cashew themselves.

Giving in to the people's 24-year-long protest, the Orissa government last year decided to grant them the right to harvest fruits in 20,234 ha of plantations in the state's 20 cashew-growing districts. The process of selecting benefeciaries has just begun. The land was transferred to the corporation in 1979 by the soil conservation department, which had taken up plantations as a soil conservation measure in the catchment areas of reservoirs in the 1950s. oscdc will now be left with only those plantations raised through its own resources and over which it has lease.

According to the decision taken by a high-level meeting chaired by chief minister Naveen Patnaik on July 31, 2008, cashew plantations will be distributed among families in predominantly tribal or scheduled areas and in areas of smaller tribal concentration--officially recognized as Modified Area Development Authority and Cluster areas. The biggest beneficiary will be the tribals of Koraput, Orissa's biggest cashew growing district with 6,608 ha under plantation.

People will get only usufructuary rights, that is the right to harvest fruits but not ownership of land. No family will be given more than 0.8 ha (two acres). Priority will be given to landless tribals followed by small and marginal tribal farmers below the poverty line, then other tribals. Surplus land will be distributed among poor scheduled caste families.

The corporation's assistant manager responsible for finance, R K Kar, said the beneficiaries would be selected in consultation with gram sabhas by the sub-collector-level committees in each sub-division. The committee will include the block development officer, assistant district welfare officer and representatives of oscdc and the soil conservation department. The process of forming committees has begun in most areas, but the selection of beneficiaries might get delayed because of the general elections, said official sources in Bhubaneswar.

Koraput mla Taraprasad Vahinipati said the government was forced to take the decision because people had prevented auction of plantations by oscdc for two years. There had been gheraos and demonstrations. Tribals of Koraput, one of Orissa's most backward districts, call usufructuary rights a big victory.

"We have fought (cashew) traders, moneylenders (who lend to contractors) and the police to achieve this," said Rama Badnaik of Matamput village of Koraput and member of the Dangar Adhikar Samiti (das), which spearheaded the movement for rights over cashew plantations. Another das member, Rajkishore Lendru added the government should give usufructuary rights not to individuals but village communities. "We have fought as a community and would like the right to be conferred on the community. Otherwise the movement's unity might break," said Lendru. Vahinipati said distributing plantations will set right a historical wrong done to the people in plantation areas.


In Koraput the soil conservation department started planting cashew trees on what was called government wasteland in areas of big dams, like Machkund, Kolab and Chitrakonda, in the 1950s to check soil erosion. The Machkund project, which came up in 1955, was the focus of the plantation with the result that cashew was grown in 4,047 ha in the undivided Machkund tehsil, which comprised Lamtaput and Nandpur blocks. The plantation was taken up under government anti-poverty schemes with an unwritten assurance to the people that once the trees bore fruits and became commercially exploitable--four years after plantation--they will be allowed to harvest and sell the fruits.

The so-called wasteland on which the plantations came up had been under cultivation by tribals for generations but their rights on the land could not be recorded, partly because of their own ignorance and partly because of the faulty method of survey. Tribals mostly did shifting cultivation, locally known as podu, on hill slopes. A survey carried out between 1939 and 1965 in the undivided Koraput district, covering Koraput, Nowrangpur, Rayagada and Malkangiri, was to record cultivation on hill slopes up to a 10-degree gradient, but the idea was abandoned because of the high cost of survey, recalled Jagannath Shroff, former revenue officer of Koraput.

Recording the land on slopes was crucial because Koraput is a hilly district and today bulk of the cashew in Machkund grows on these slopes. Tribals say they initially objected to raising cashew plantation on their land but kept quiet when officials of the soil conservation department assured them the plantations would be theirs for harvesting. They even helped guard and nurture the plantations. However, when the time for harvesting came, the department claimed the cashew and made money.

This was a blow to farmers in Koraput, which is home to 62 tribes, including Paraja, Gadaba, Kondh and Bhumia. Though tribals constitute half the district's population of 11,77,954, they own less than a third of the private land in Koraput. The tribals were also displaced in large numbers by the dams.

In very few cases the department transferred the usufructuary rights to landless people. According to Koraput soil conservation department officials, till date 20,672 people have been given usufructuary pattas (deeds) in Nandpur and Lamtaput blocks, where plantations are concentrated. The figure is negligible considering that over 100,000 people were affected in the district by cashew cultivation, said Bidyut Mohanty, the secretary of the Society for Promoting Rural Education and Development, which supported das. The department's assistant engineer in Koraput, S K Parida, insisted people were never promised usufructuary rights or ownership. "In fact, there were very few people engaged in farming on hill slopes then. However, we still tried to help them by involving them in plucking, for which they were paid Rs 20 to Rs 25 a day," said Parida.

When oscdc was formed in 1979, the government transferred the bulk of the cashew plantations to the corporation, which started auctioning them for harvesting. This despite the corporation not having lease rights over more than 90 per cent of land.

das member Sukhram Gadanga alleged oscdc did not consult gram sabhas while inviting bids for plantations on common land, though in scheduled areas like Koraput it is mandatory. Guneipada sarpanch Sukura Muduli said except for once the gram sabha was not consulted on plantation matters.


Though anger against the corporation had been brewing for quite sometime, the first revolt took place in 1985 in Enugu village in Koraput under the leadership of Sania Sisa, a marginal farmer. People entered the plantations leased to a businessman in Jeypore, Koraput's commercial nerve centre. The businessman tried to have a deal with them but they refused to pluck fruits for him. "Next year we decided not to allow anyone to obtain the lease. However, the corporation put pressure on its guard Manu Khilo of our village to get the lease but we didn't let him harvest fruits. He was forced to give up his plan and join the movement," said Sisa, 50.

Soon the movement spread to neighbouring Bangurpada, Raipada, Mahada and Dahanaput villages, with people harvesting cashew from auctioned plantations. Sisa and his three colleagues were arrested but it did not deter the tribals. The agitation intensified with the formation of the Dangar Suraksha Samiti in 2000, with Sisa becoming its founder president. The Samiti was converted into Dangar Adhikar Samiti in 2005. As its first president Sisa declared harvesting cashew from the plantations on the village common land the right of the people.

das launched a massive awareness drive, holding meetings and organizing demonstrations against auctioning. Village after village started resisting the entry of corporation officials and tender holders into the plantations. In 2007 feisty Domai Khilo of Litiput village took on tender holders in her village. "The contract had been obtained by Budu Khilo and Kesab Khilo who were hell-bent on entering plantations but the rest of the village protested," she said. "They called the police. We said we were ready to go to jail but with our children and livestock. The police had to go back."

Hemant Kumar Rout, oscdc manager of Jeypore division, admitted people have taken over the plantations in Machkund. Shantanu Mohanty, officer-in-charge of the Machkund police station who has received transfer orders, expressed helplessness. "You cannot do anything under these circumstances. People will just not allow tender holders to enter plantations," he said.

Even tender holders have joined the movement against the corporation. Ghenu Dalei of Hantalpur used to bid for cashew tenders by pawning gold at moneylenders'. The harvested stock was sold to the same moneylenders who charged a monthly interest of 4 per cent. In 2006 das members did not let him harvest cashew. When he demanded his money back from the corporation he was returned Rs 40,000 of the Rs one lakh paid. "That day I decided to quit bidding and join the movement," said Dalei, whose son Daitari is one of the most active members of das.

As people celebrate their victory, Rout of oscdc doubts it will be a peaceful end to a long struggle. He said the government's decision to give priority to landless tribals might drive a wedge between tribals and dalits. "They have emasculated oscdc with the decision," Rout added. das activists have launched a campaign for granting usufructuary rights to village communities. They are also drawing up plans to maximize people's profits from cashew. They want to set up a cashew processing unit by forming a cooperative. "We sell businessmen raw cashew for Rs 35-50 per kg and they sell the processed product for Rs 300 per kg," said Sukhram. The victory over the corporation has given the tribals the confidence to plan the future.