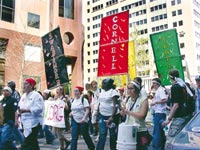 The 60th anniversary of Washington-based organisations, the World Bank (wb) and International Monetary Fund (imf), was celebrated amidst clamours for reform. Critics distributed 'unhappy birthday' cards, organised demonstrations and banged on pots and pans. The main grievance was the 'democracy deficit' in the two institutions.

Reading a statement on behalf of African countries, Sudanese finance minister Al-Zubeir Ahmed al-Hassan said that the lack of visible progress in respect of participation and voting power of developing countries in the two institutions was disappointing. A more equitable form of representation was called for, and a report sought on the issue. At present, the imf and wb do not follow the 'one-country, one-vote' principle. Only two executive directors (ed) represent the 46 sub-Saharan African countries, while eight Northern nations have an ed each.