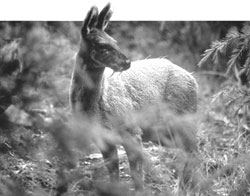 union health minister C P Thakur recently announced a plan to commercialise the farming of musk deer for medicinal purposes. To execute this plan, he proposes to set up captive breeding centres in Jammu, Himachal Pradesh and in certain areas of Uttaranchal.

Musk, an aromatic secretion from the male Himalayan musk deer, is used to prepare medicines to treat asthma, epilepsy, hysteria and other disorders. It is obtained from the glands situated beneath the abdomen of the deer and fetch up to Rs 2,50,000 per kilogramme in the international market.

But wildlifers contend that this recent decision spells doom for the 6,000-odd musk deer population of India. It is almost impossible to extract musk without killing the animal, they feel. The once common musk deer, which was found along the Himalayas, today exists only in certain isolated pockets of the region. The animal is also included in Schedule I of the Wildlife Protection Act (wpa), which is a list of endangered species.

Thakur's plan has also drawn flak from his cabinet colleague, Maneka Gandhi, who is the Union minister of state for programme implementation and statistics with independent charge of animal care. "This is a ridiculous suggestion, the health ministry has no power to breed any wild animals," she says.

As yet captive breeding experiments have faced difficulties. In three musk deer farms (two in Uttaranchal and one in Shimla, Himachal Pradesh), breeding has been largely unsuccessful due to insufficient scientific knowledge.

S C Sharma, additional inspector general of forests (wildlife), Union ministry of environment and forests, says: "There have been numerous attempts at breeding musk deer over the past 30 years, but the success rate is very low." R L Singh, principal chief conservator of forests, Uttar Pradesh, points out: "Even if it succeeds, the Wildlife (Amendment) Act, 1991, completely prohibits the use of wildlife products." Sharma adds that the trade of animals listed in Schedule I of wpa is possible only with the consent of parliament.

Wildlife in India will remain unharvested but harmed.