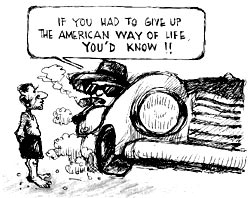 even as Japan expressed doubts whether the industrialised countries would agree to cut down greenhouse gas ( ghg ) emissions at the third Conference of Parties ( cop -3) in Kyoto, developed countries came in for criticism for not honouring their commitments to the un Framework Convention on Climate Change ( fccc ) at a two-day regional workshop in Dhaka on November 8-10.

Industrialised countries are responsible for about 80 per cent of the global carbon dioxide ( co 2 ) emissions, though they account for only 20 per cent of the world's population. The us , which tops the list of polluters, has been hedging on the issue of reduction of ghg s. Though us undersecretary of state Timothy Worth recently said that the us will "adopt an intricate approach" using many variables to calculate each nation's rate for cutting discharge of ghg, it has not spelt out how it is going to account for pollution in previous years. Lack of consensus between the European Union ( eu ), which is willing to make concessions, and the us , has led to a deadlock at the preparatory meetings at Bonn in October and at Tokyo in November. The Dhaka meet was the third of the regional workshops focusing on the common experiences of countries of the South in technology cooperation programmes.

About 50 global experts, policy planners and activists participated in the deliberations at Dhaka. The inaugural session was addressed, among others, by Bangladeshi environment and forests minister Syeda Sajeda Chowdhury, Irving Mintzer of the us -based Pacific Institute, and well-known scientist Ogunlade Davidson from Senegal.

Setting the "doing well by doing good" tone for the discussions, Mintzer said that the task before developing countries was to illustrate good practice through country case studies. Several initiatives have been taken in developing countries, many of which will also reduce net ghg emissions. But the developed countries have been extremely slow on their part.

A review of current strategies, and improved access to information on low emission technologies, better networking capabilities, and incentives to promote new partnerships will be critically important to reducing growth rate in ghg emissions. Mintzer urged that the new partnerships identify "North-South, South-South, and South/South-North opportunities for cooperation". Efforts in education and dissemination of information would go a long way in strengthening national and regional institutions, he said.

Participants emphasised that technical and financial support was essential for developing countries to be able handle the transition.

Mintzer and others, including Bangladeshi negotiator at the fccc , Towfiq Ali, said that understanding of global warming has increased over the years. Experts today are calling for deeper worldwide cuts in ghg emissions. However, they said, some parties have launched a misinformation campaign, blaming the developing countries for inaction.

Ali said that at the climate negotiators' meeting at Bonn in October, news of good practices adopted by the South was not circulated widely. Most actions in ghg reduction and sink enhancement are being undertaken by ordinary people and communities. These are hardly being reported.

Reiterating the view that developing countries "see the issue of climate change in the context of sustainable development", president of the Bangalore-based International Energy Initiative, Amulya K N Reddy, said that it is only natural that the concern of the South proceed from the local to regional and national level, before moving on to the global level.

Participants agreed that the South should ask the North to bring down co 2 emissions and compensate the South for the cost of keeping emissions low. Brazil would propose the setting up of an international fund to finance emission abatement in developing countries at Kyoto. The fund would run on 'a quota' system. Developed countries with emissions higher than their ceiling would be required to contribute accordingly.

It was also agreed that the common perception of industrialised countries that the South is trying to 'ride the environment bogey as a ploy for begging must be dispelled.' The first step should be to develop comprehensive statistics of the contribution of the South. Negotiators from developing countries would be responsible for conveying this information.

The world is looking to Japan for an initiative, which has announced official targets for emission cuts of 5 per cent of the 1990 level by 2010. The proposal, however, includes exceptions which could mean that the actual cuts amount to only 2.5 per cent.

The Japanese press has been highly critical of the government, stressing that more is needed from Japan which is the host for cop -3. Japan's co 2 emissions hit a record 332 million tonnes in fiscal 1995. This was 8.3 per cent higher than the 1990 figure.