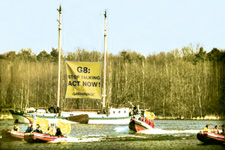 in a recent meet in Germany's Potsdam city on March 16-17, 2007, g8 countries and five other major developing countries agreed to launch the Potsdam Initiative aimed at preventing biodiversity loss due to climate change.

It was for the first time that developing nations took part in the annual g8-ministerial meeting. The environment ministers of eight industrialised countries--Canada, France, Germany, Italy, Japan, Russia, the uk and the us --and of China, India, Brazil, Mexico and South Africa agreed to launch the initiative. It is to come up with a study like the Stern Review on climate change on the economic costs of biodiversity loss. A joint initiative will be launched namely conservation and sustainable use of biological diversity, patterns of consumption and production, financing and public awareness about the consequences of species loss.

Sigmar Gabriel, German environment minister, who chaired the meeting, said the meet was a step ahead for biodiversity conservation and climate change mitigation as it brought together generators of some two-thirds of global greenhouse gas emissions.

Some criticised the meet saying it was only a step to win the confidence of developing nations rather than taking any concrete action. Greenpeace activists hurled a banner which said 'Stop talking, Act Now'. Gabriel too agreed: "No major decisions can be expected now." The meet was to prepare the ground for decisions that will be taken at the g8 summit in Heiligendamm, Germany and at the climate change conference to be held in Bali later this year.

However, the us has some objections. "us did not want to pay financial compensations to developing countries for progress in combating climate change," said Gabriel. This would affect countries like Brazil, which had had considerable success in reforesting the Amazon rainforest and countries like Peru and Indonesia, which have been demanding compensation for preserving biodiversity.