Erosion may be speeding shift 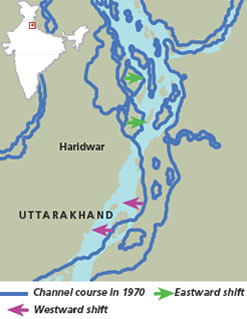 The Ganga in Haridwar district has shifted 500 metres from its course over the past four decades, shows a study by the Uttarakhand Space Application Centre (usac). The state government agency said erosion of the river banks maybe speeding change of course.

“Half a kilometre in 36 years can be a major shift. The absence of erosion preventive measures might be the reason for such accelerated shift,” said M M Kimothi, director of usac. He said the shifting may continue in which case cultivable land along the Ganges could submerge. The study compared recent satellite images of Haridwar with those taken in 1970 by the Survey of India to arrive at its conclusion.

“The shift was first noticed in the satellite images taken a year ago when usac was collecting data for the Kumbh preparations,” said Chitiz Joshi, project associate with usac. The study noted heavy sedimentation along the banks in the pre-monsoon pictures; the post-monsoon pictures showed the sedimentation transported downstream. Haridwar’s district collector R Meenakshi Sundaram said he was not aware of such a report. “If there is serious bank erosion, we’ll implement flood preventive measures,” he said.