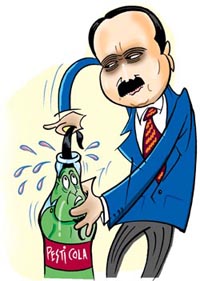 The committee headed by N K Ganguly, director general, Indian Council of Medical Research, has finally made its recommendations, mooting a final product standard to regulate soft drinks. The committee's report, filed in the Supreme Court on March 13, now paves the way for the Union ministry of health and family welfare to finalise and notify a mandatory final product standard for pesticide residues in soft drinks.

When in place, these standards will be the world's first soft drink companies will have to meet. The recommendations come as a vindication for the Centre for Science and Environment's (cse's) research on pesticide residues in soft drinks. For almost four years it has been advocating a final product standard for soft drinks as a public health imperative.This demand had been endorsed by a joint parliamentary committee (jpc) in February 2004, which directed the government to establish a final product standard.

The Ganguly committee, also known as the National Level Expert Group, was constituted in November 2004 by the health ministry to guide the authorities fixing "maximum residue levels limits of pesticides in carbonated beverages, fruit and vegetable juices and other finished products"; "on monitoring of pesticides in carbonated beverages"; and, "based on the contents of the soft drinks/beverages to advise on their harmful effects". The committee, agreeing with jpc's observations, said "Fruits and vegetables juices and other finished products cannot be clubbed with the carbonated water for fixation of maximum limits." While talking about the finished product standards for soft drinks, the panel echoed what jpc had said "The reason that the other countries have not fixed such limits, should not dissuade our lawmakers in attempting to do so."

The committee had got samples of sugar, sugar syrup and soft drinks tested. This was significant since soft drink companies have for long argued that sugar is contaminated, to avoid regulation. During the meetings of a bis committee, too, industry representatives had argued that Indian sugar was contaminated, which was the sources of residues in their products. But sugar sample tests, both by soft drink companies and the authorities, had not shown pesticide residues. The Ganguly panels test reports reaffirm this. "The results obtained conclusively demonstrated that sugar manufactured in India and made available to the carbonated water industry is practically free from pesticide residues and, if used, is not likely to contribute the levels more than their limits of quantification, i.e., 0.05 ppb....," says the report. Even sugar syrup samples showed a complete absence of pesticide residues.
While testing samples of soft drinks to ascertain the levels of pesticides in them, the panel "found pesticide residues in colas", says an expert enlisted by it.

A total of 19 samples of popular brands of carbonated water were collected from designated sources from different parts of the country and were tested at the National Institute of Occupational Health, Ahmedabad. Residues of hch isomers and ddt, both organochlorine pesticides, were detected. Levels of both the pesticides in certain samples were found to be 2-3.3 times higher than the individual limit finalised by bis. Some samples were found to have higher total pesticide levels than bis's 0.5 ppb limit.

These tests proved to be a setback for the cola companies on one more count, showing colas can be reliably and repeatedly tested both for monitoring and regulation. Soft drink companies have maintained that the government cannot set a standard because their product, being a complex matrix, cannot be reliably tested in laboratories. In its presentation to the committee, cse had shown how governments across the world test soft drinks for pesticide residues.

The committee accepted that laboratory tests can be done to check for pesticides at sub-ppb levels. "In recent times, it is possible to measure residues of several compounds in single analysis by multi-residue methods at sub-ppb levels using modern techniques such as GC-MS/MS or LC-MS/MS," the committee observed. cse had in its testing of cola samples used the GC-MS/MS.

The committee went on to specify certain criteria for analysis of pesticide residues for regulatory or legal purposes which include "confirmation of residues along with quantification", precisely as cse had done for its August 2006 study on soft drinks.


bis had prudently established an upper limit for total pesticide residues. Flying in the face of that standard, the Ganguly panel says "Fixation of limits for total pesticide is not considered scientifically justified in the context of the present knowledge as no interaction has been reported to occur between pesticides at such a low level." This conclusion is wrong on two counts. First, by basing its conclusion on the present limits of scientific knowledge the panel has towed industry's line. Typically, industry--pesticide, food or any other--has hidden behind the excuse of scientific uncertainties. Any science-based standard obfuscates the importance of health and does not adequately reflect public health concerns, the primary purpose of a food standard. Secondly, even this limitation of science relied upon by Ganguly is wrong because cumulative impacts of pesticides and pesticides with a common mode of action (those which have similar adverse effects) are a major area of concern today. Newer pesticides are known to be extremely toxic at very low levels.

The second major problem with the committee is its logical basis for standard setting. The committee has confounded the issue by suggesting standards for pesticide residues should be set on the basis of total consumption of these drinks countrywide. This will automatically mean that standards have to be revised if consumption increases, because public health risk will be enhanced. Or that consumption of these beverages should be capped at the present level, based on which standards were fixed. This is not a scientifically advisable method for setting a standard. Instead, the standard has to be based on pesticides allowed in the different components of the food basket as is done across the world. This trade-off between nutrition and pesticides will allow for pesticides in products which are essential for nutrition and well-being. This would mean that soft drinks will get minimum allowances for pesticides since they are not essential or nutritive.This assumes even more significance as monitoring studies have shown that Indians are exposed to higher contamination levels and no quota for toxins can be assigned to non-essential categories of food as defined by who.

The stage is now set for the health ministry to notify the finished product standards for soft drinks. While the conservative standards suggested by the Ganguly committee can be notified as mandatory standards, the standards finalised by the bis must also be notified for voluntary certification.

The companies have started making noises about "scientifically validated testing methodologies" and this might be the next ruse to avoid regulations. The Ganguly committee has already made detailed observations on testing methodologies and protocols. A parallel process to validate and notify testing protocols can therefore begin immediately and the final standard and regulatory framework can be notified simultaneously.

The Union health and family welfare minister informed parliament on August 22 that his ministry was waiting for the recommendations of the Ganguly committee to finalise regulations for soft drinks. Now, that the recommendations are in, it's time to act.