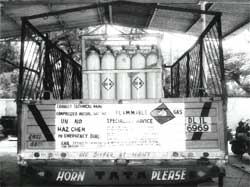 natural gas is one of the most promising fuels available to us. It is cleaner than most other fossil fuels and is available in plenty. The only problem is its transportation, which in the absence of pipelines, is virtually impossible. Till such time as pipelines are not laid, we have the spectacular sight of huge gas flares at gas fields. But now come reports of the development of a new catalyst which will make it easier to convert natural gas into a derivative of methanol, which -- being liquid -- can be easily transported in tankers (Science , Vol 280, No 5363).

Roy A Periana and his team at the Catalytica Advanced Technologies Inc, California, usa , have reported the development of a platinum-based catalyst which will make possible a low-temperature conversion of natural gas into a methanol derivative with about 70 per cent efficiency. Natural gas is a colourless, highly inflammable gaseous hydrocarbon consisting primarily of methane and ethane. It is a petro-product that occurs commonly with crude oil. It is found in abundance in many parts of the world and could be harnessed with ease if the problems of transportation were solved. Occasionally, it is liquefied and transported but the costs are prohibitive. In the 1980s, a catalyst was discovered which could convert methane gas into methanol. But the efficiency was about 2 per cent.

In 1993, Periana and his team had made a catalyst with mercury-based chemicals. However, it was too hazardous for use. Now the team has used a platinum-based catalyst which contains a small amount of bipyrimidine. This is essential to control the reactivity of the metal. The catalyst dissolves in a bath of sulphuric acid and works at around 200 c . It changes methane into methyl bisulphate, which then drops out of the reaction.

This is a hindrance as the final product is not methanol but something which has to be further processed to get methanol. Nevertheless, the high yield of conversion makes the process attractive. If the process proves to be viable on the industrial scale, we would witness a virtual revolution in the energy sector as it would openup a vast, hitherto untapped resource.