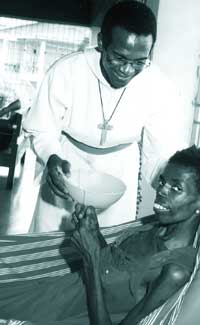 geneticists looking for a cure to the fatal human immunodeficiency virus (hiv) infection have reason to be happy. Two research groups--in Germany and in the uk-- in separate studies, established crucial genetic links the virus exploits to spread the disease to unaffected cells in the human body. The findings can help develop a treatment for aids.

The German team of researchers from the Heinrich Pette Institute in Hamburg and the Nuremberg-Erlangen University claimed to have identified a protein, deoxyhypusine (dhs), in the human body that helps hiv-1 multiply. By neutralising dhs , the propagation of the virus can be blocked, says a report by the team, led by Ilona Hauber, in the January issue of a us publication, Journal of Clinical Investigation (Vol 115, No 1). This is a novel strategy which runs contrary to the conventional approach of using antiretroviral drugs to block the viral proteins.

In the other study, British scientists funded by uk 's Medical Research Council (mrc) discovered a crucial difference between a gene found in rhesus monkeys that makes them immune to hiv, and its counterpart in humans. Led by Jonathan Stoye, the researchers claimed in a paper in the recent issue of Current Biology (Vol 15, No 1) that the human gene does not code for an amino acid, which scientists believe is what enables rhesus monkeys to resist hiv infection.

The mrc scientists plan to spend the next couple of years trying to devise a form of gene therapy using this new-found knowledge.

Almost 40 million people live with hiv infection or aids and the number is increasing, especially in several countries of Africa and Asia. Even in the developed world, infection rates are rising among the young people.