In a bid to halt the crippling disease in its tracks, American researchers have recently experimented with gene therapy as a cure for arthritis 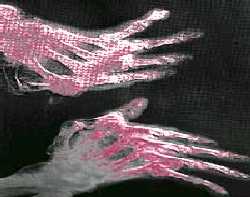 an exciting experiment has opened up new vistas for arthritis research. For the first time gene therapy has been tried on a chronic disease which is not life-threatening. It is also the maiden effort at using gene therapy to correct an autoimmune disorder like rheumatoid arthritis. An autoimmune disorder is a condition in which the patient's immune system attacks his or her own tissues.

Researchers at the University of Pittsburgh Medical Centre in the us injected genetically engineered cells into two knuckles in a woman, in an attempt to control the inflammation of her joints. The patient suffered from rheumatoid arthritis, a disease characterised by the inflammation of synovial tissues, tissues that line the joints. The inflammation is caused by the immune system which produces cells and chemicals that attack these tissues. Women are three times more likely than men to develop arthritis, which normally strikes a person during middle age and gets progressively worse.

For the therapy, researchers have used a gene that produces a chemical that blocks the action of interleukin-1, a substance active throughout the body which helps start a cascading immune response against foreign substances and microbes. Interleukin-1 has been found to be the key substance in the inflammation and destruction of synovial tissue in arthritic patients. Scientists removed synovial cells from the patients, maintained these in a culture in the laboratory, introduced the gene responsible for blocking interleukin-1 into these through a retrovirus and put back the treated cells into the joints. The target was to let the modified cells bind themselves to the lining of the joints and produce a chemical that blocks receptors that would normally grab interleukin-1 and permit it to do the damage. The first in a series of eight similar tests planned for the year, the experiment also aims at establishing the safety of the procedure before proceeding with long-term trials.

"This opens a new chapter in the treatment of arthritis and other disorders of the bones and joint," says Christopher H Evans, the team's leader. Scientists feel that gene therapy might be more effective against arthritis than other diseases. "In cancer, for instance, a therapy has to kill every malignant cell to be effective, but in the case of arthritis, even a partial reduction in inflammation could bring great relief to the patients," explains Raphael Hirsch, an arthritis researcher at the Children's Hospital Medical Centre in Cincinnati, us .

Although this initial test holds no promise of relief for the patients involved, it may eventually help others. Scientists feel that after only a week's exposure to the potential treatment, "the knuckles should tell us if the gene transfer worked, and if it produced a gene product that blocked the interleukin-1 receptors". If the test gives a positive result, scientists propose to intervene at the earlier stages of the disease when there is chance of stalling the inflammation and saving the joints. And if the therapy is successful, "it might be tried on other forms of arthritis and other autoimmune diseases", adds Evans. While researchers wait with crossed fingers, one thing remains clear: that treating arthritis with gene therapy may not be a distant dream.