Worried by the steady erosion of India's wealth of genetic diversity, a major expansion project will quadruple storage capacity in the national gene bank 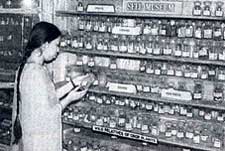 THE NATIONAL Bureau of Plant Genetic Resources (NBPGR), a giant "freezer" in New Delhi to store plant genes, is implementing a Rs 64.8-crore expansion project that will increase its storage capacity four-fold -- from 154,964 varieties at present to 600,000 varieties. The expansion, with partial assistance of about Rs 40 crore from the United States, also envisages a cryogenic bank that would preserve seeds and tissues at temperatures as low as -196OC. The expansion project was prompted by the realisation that the country's genetic diversity was being steadily eroded by modern agriculture, urbanisation and deforestation.

NBPGR has a five-year framework for collecting plant germplasm and its annual plans are drafted in consultation with agricultural universities and other institutions. M N Koppar, head of the bureau's germplasm collection division, explains, "While the stress is on collecting agri-horticultural plants (plants used in agriculture and horticulture), we also collect any plant that is not in our banks." Since its inception in 1976, NBPGR has carried out more than 300 germplasm collection expeditions and garnered 1.55 lakh samples of germplasm.

Botanists armed with collection equipment fan out from 8 bases in their all-terrain vehicles to reach distant areas. Location of plants is determined on the basis of soil and climatic conditions. For example, a certain set of soil and weather conditions makes the northeast, particularly Meghalaya, very suitable for citrus varieties, and the Andamans for coconuts.
Samples of crops like wheat can be conveniently collected as packets of seeds. Potatoes have to be gathered as tubers because seeds, though better for preservation, are seldom available. Sugarcane has to be gathered as buds as the odds of finding any viable seeds are rare. Interestingly, the economically poorer parts of the country are the richest in biodiversity. For instance, the poverty-stricken Chattisgarh region has yielded an extraordinary biodiversity of rice varieties. Similarly, NBPGR scientists have had much success with okra and brinjal in Chattisgarh, cucurbits and grain legumes in the Telengana region of Andhra Pradesh and many varieties of pepper, banana and paddy from the neglected hill districts in the south.

At the base station, a taxonomist verifies and classifies the samples and ensures they carry no fungi or disease. They are then germinated under controlled conditions at the Indian Agriculture Research Institute (IARI) farms and made ready for storage.

Seeds are dried and stored at -20OC for some years. Seeds that lose their ability to germinate if stored are called desiccant seeds and they include most fruit and forest trees. "So, we only store the former variety of seeds, which include those of cereals, pulses, millets an other crops, as these retain moisture. Desiccation tolerant seeds are stored in the gene bank as base collections while desiccant plants are maintained as active collections," explained P P Khanna, principal scientist at NBPGR. He said desiccant plants are grown in botanical gardens and then studied and improved by tissue culture. Plant collection is hazardous. Besides having to negotiate dangerous hilly terrain, scientists often encounter hostile local people unwilling to part with plants. The northeast, rich in plant varieties, especially medicinal, is largely inaccessible to organised scientific expeditions because of insurgency. Another problem is that the inhabitants of some areas cut plants indiscriminately for selling. As a result, sarpgandha, a Himalayan herb whose extract is used to treat heart ailments, is threatened with extinction.

Scientists the world over avail of the NBPGR seed facility through a germplasm exchange programme. During the first quarter of the year, NBPGR exported 375 samples and received 3,519 samples from various countries. However, the export of a few plant species is banned in the "national interest". For instance, export of black pepper germplasm is prohibited to protect India's supremacy in the international pepper trade. Within India, anyone involved in plant or crop research can get seeds from the bureau. Khanna explained, "We do not deal with farmers directly, but the research that scientists throughout the country do, based on our collections, eventually gets transferred to the field."

Indian scientists, unlike their Western counterparts, have not yet resorted to patenting indigenous seeds."You see, not just India, but most developing countries are the major sources of cash crops," said Khanna. "Often developed countries get these seeds from us and then patent them. The government is, however, thinking of patenting seeds, so we cannot comment."

Many private users have complained of the lack of computerised data on the bureau's resources. As a result, it takes inordinately long to locate a particular plant from the 154,964 varieties currently stored by the bureau. Vishnu Swaroop, director of Indo-American Hybrid Seeds, a company that is developing and selling high-quality seeds, says the bureau should issue a directory of germplasm so that users know what the bank has to offer. "We do not mind paying for such a facility, as the NBPGR has a good collection of plants and they have been very helpful when it comes to providing material," Swaroop noted.

There are about 250,000 plant species identified worldwide, most of them in the tropics, but this genetic variety is dropping steadily. It is estimated that at the current rate of deforestation, the world will lose as much as 10 per cent of its species in 30 years, substantially reducing the number of plants available as insurance against disease or destruction.