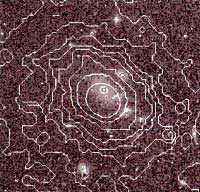 a cluster of galaxies has been found that looks bright in the x -rays region but contains only a single visible galaxy. A team led by M Hattori at the Max-Plank-Institut fur extraterrestrische Physik, Giessenbachstrasse, Germany, reports that it is the most distant cluster of galaxies in the x -rays region. The discovery may help understand formation of structures in the Universe (Nature , Vol 388, No 6638).

Structures in the Universe exist in diverse forms such as stars, galaxies of stars and clusters of galaxies. Clusters are the largest gravitationally bound objects that contain nearly 10,000 galaxies. They are divided into three classes -- groups, irregulars, and sphericals.

Groups are composed of small, compact bunch of 10-50 galaxies, spanning about 5,000,000 light-years and include the Milky Way Galaxy, the Magellanic Clouds, the Andromeda Galaxy, and 18 other systems of small varieties. Irregular clusters are large, loosely structured assembly of mixed galaxy types (mostly spirals and ellipticals), totalling nearly 1,000 systems and extending out 10,000,000 to 50,000,000 light-years. Spherical clusters are dense and consist elliptical galaxies.

Normally clusters of galaxies contain stars (as parts of constituent galaxies) as well as hot, x -ray emitting gas between galaxies. The gas contains about three times as much mass as the stars and is rich with heavy elements such as iron.

Distribution of elements in the cluster's gas would provide clues about the formation of stars in the Universe. Another property of clusters is that they can serve as gravitational lenses and distort images of galaxies behind them. Through this property, mass contained in a cluster can be estimated.

The x -ray data indicate that the cluster has a similar size, luminosity and iron abundance to other clusters found nearby. In the optical region, they could only locate one galaxy. However, the researchers are hopeful of finding some more luminous galaxies with the help of improved sensitivity. They may be fainter and hence could have escaped detection in the optical surveys, they feel.

The presence of high iron in the cluster (about 40 per cent that of the Sun) suggests presence of massive stars where iron is produced. As these stars have a life less than two billion years, metals such as iron and silicon must have formed when the cluster was much younger.

Galaxy formation in the Universe remains a controversial subject. There are several models to explain the formation of galaxies, however, none of them is satisfactory when compared to observations. The abundance of metals in x -ray haloes of clusters depend on galactic evolution of constituent galaxies and stars in them.

The abundance of iron at these distances and without any obvious associated stars could provide insights into the nature and epoch of galaxy formation. With improved optical surveys and studies of the cluster at other wavelengths, researchers may have a new means of testing cosmological theories of structure formation and production of heavy elements in the inter cluster medium.