Get out of doldrums 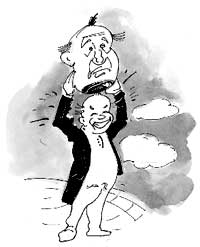 a recent research now says that depression may be as dangerous as high cholesterol in giving you a heart attack.

The new study by William W Eaton of the Johns Hopkins School of Hygiene and Public Health, in Baltimore, us, shows that those depressed were four times more likely to have a heart attack as compared to those with a cheery state of mind. The researchers studied over 1,500 people in the Baltimore area, who were screened for depression during the '80s. Among the 444 people who were depressed 13 years ago, 27 had heart attacks as compared to just 37 of the 1,107 who did not suffer from this mental ailment.

The investigators statistically adjusted their data with other factors like age, sex, marital status and a history of blood pressure -- factors that predispose a person to heart attack. Cardiologists have for long suspected that depression is an important predisposing factor for heart attacks and Eaton's study confirms their fears.

Psychiatrists list three kinds of depression. The first is psycho-motor retardation, in which a person goes through a phase of inactivity and just feels like lying down. People in the second group have difficulty in thinking and making decisions. The last category relates to outward expression, when the depressed patient constantly wears a lost and dejected look.

Eaton's group assessed the problem of depression in people much before they had heart attacks. His team was part of a five-centre project undertaken by the National Institute of Mental Health, Bethesda -- a wider programme to look at the mental health of over 20,000 Americans. When data about the Baltimore population began to flow in, Eaton decided to probe the relationship between depression and heart disease as earlier studies had proved inconclusive.

Understandably, this report has made psychiatrists probe why depression leads to heart disease. According to Wayne Katon, a professor of psychiatry at the University of Washington in Seattle, a biochemical link cannot be ruled out. Katon says that there are indications that depressed people have stickier platelets -- blood cells involved in clotting. This could mean that depressed people have blood with more chances of clot formation, leading to blocked blood vessels and, consequently, heart attacks.

Katon advises his patients to get treated for depression particularly as there are now very effective means of treatment. To drive this point home effectively, the American Psychiatric Association (apa) in its annual meeting at New York held in September 1995 focused on how treating depression can improve the quality of life among people with chronic illnesses. apa recommended that aggressive treatment of depression may promote better compliance with general medical care and lower its cost, improve patients' quality of life and may possibly forestall suicide (Journal of American Medical Association, Vol 276, No 11).

The meeting discussed the impact of depression on neurological illnesses, cancer and diabetes. According to Stuart Yudofsky, a professor at the Baylor College of Medicine at Houston, us, more than half the people within a week of getting a stroke, get into a state of depression.

Even a year later, they still are unable to get over the depression. Other chronic ailments that lead to depression include Parkinson's disease where close to 80 per cent of such patients go into depression.

Among those with cancer, the likelihood of depression varies with the cancer site. According to J Stephen McDaniel, a psychiatrist at the Emory University School of Medicine in Atlanta, the rate varies from 50 per cent in those with cancer of pancreas to a mere 1.5 per cent of those with acute leukaemia. The average depression rates in cancer patients is about 24 per cent. The risk factors that drive people into depression include advanced stage of cancer, previous history of depression, history of alcoholism and poorly controlled pain.

People with diabetes have a 25 per cent lifetime prevalance rate of depression says Paul Goodnick, a professor of psychiatry at the University of Miami School of Medicine, Florida. In such patients depression has a potent impact on illness as 70 per cent of such patients develop diabetic complications either because they do not take medicines properly or because they do not exercise proper dietary control. To compound the problem, he says, the presence of diabetes severely limits medication choices to cure depression.

Depression also leads to more violence. More than 60 per cent women who have murdered their children have sought help from psychiatrists in the very recent past. In addition, some 10 to 15 per cent of people with depressive disorders also commit suicides. Taking these factors into account, the apa recommends that physicians in all specialities should consider depression more seriously.