Getting back the voice 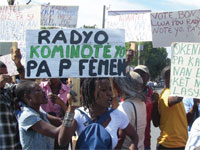 A community radio station silenced by the Haitian authorities is open again thanks to the mobilisation by other stations as well as organisations and associations both inside and outside the Caribbean country. In November, Haiti’s telecom agency, Conseil National de Télécommunication (CONATEL), shut down Radio Voice of Claudy Museau, named after democratic militant Claudy Museau and known for providing space for programmes and guests critical of the government.

The shutdown was denounced by local and international organisations. In a demonstration later that month dozens of members of community radio stations from across the country, joined by students and representatives of various organisations, filled the streets in front of the CONATEL and Ministry of Communication buildings. Marchers carried posters with slogans like, “Community radios are the result of struggles by democratic and popular sectors! You can’t just shut them down!”