Getting close and personal 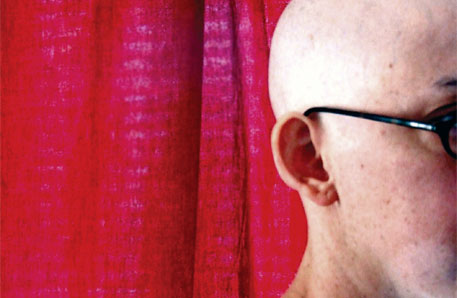 Cancer is one of the few scourges that have been known for thousands of years but scientists are yet to find a definitive treatment for it. According to WHO, cancer is a leading cause of death worldwide, accounting for 8.2 million deaths in 2012; the number will increase by 70 per cent in the next two decades. The problem is there are hundreds of types of cancer, and they are all caused by cells dividing interminably. So, conventionally they are treated by excising malignant tumours or backing up the surgery with drugs, chemotherapy and radiotherapy. But these standardised treatments evoke different responses, depending on the physiological and genetic make-up of the patient.

This crudeness of treatment, however, is rapidly changing. In the past few decades, scientists have realised that the possible cure lies in the patient’s cells, in the genes. Decoding the genes will not only help understand the tumours and predict the risk of cancer but tailor the treatment (see ‘Tailor thy treatment’).

Since making its debut in the early 1990s, personalised cancer therapy has revolutionised cancer screening, prevention and treatment. It is broadly classified into two types: targeted therapies and pharmacogenomics therapy. While pharmacogenomics focuses on the way a person’s genes control the body’s immune reaction, in targeted therapy, drugs are targeted on specific molecules, proteins or genes in a tumour that contribute to cancer. 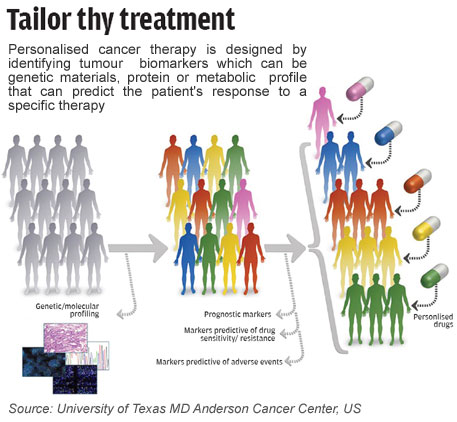 However, the treatment is still in its nascent stage.

To tailor the therapies, scientists use the patient’s genetic make-up and tumour biology. But tumour sampling and genetic or molecular testing (for biomarkers to identify gene mutations) is time consuming and expensive, often ranging from Rs 5,000 to Rs 25,000. Even if one gets it done, mutations can be targeted only with approved drugs or a new drug under clinical trial. This makes the cost of therapy prohibitive even for those in high income countries.

Gordon B Mills, an expert in the field who has several research studies and awards to his credit, demystifies the scope of personalised therapies. “Our ability to analyse tumours at a molecular level has demonstrated remarkable heterogeneity between patients, that is likely to explain the plateau,” says Mills, chairperson of department of systems biology at the University of Texas M D Anderson Cancer Center, US. For instance, there are four to 20 kinds of ductal breast cancer, each requiring specific therapy. This understanding has resulted in only 1-2 per cent of improvement in breast cancer treatment in the past 15 years. Besides, all types of cancer do not have personalised treatment options. Mills says, “Even following testing, only about half of patients have abnormalities that could be treated with targeted therapies. Only about 15 per cent of patients who undergo testing actually received targeted therapies.” Besides, in some patients the therapy abruptly stops working for unknown reasons.

Martine Piccart, president of the European Society of Medical Oncology (ESMO), in a patient’s guide released in 2013 admits this limitation. “Currently, we are not yet in the era of personalised oncology but in the era of stratified oncology, which means we are able to classify cancers according to critical targets against which we hope to develop effective drugs,” Piccart states. Modern technologies such as deep DNA sequencing will be powerful tools in the future allowing us to identify drugable mutations, he adds.

For example, certain tumours can express a protein called PD-L1. The protein sends the immune system to hibernation when it binds to PD-1 receptor, and the cancer cells remain undetected. Targeted therapies can block either PD-L1 or PD-1 to activate the immune system.

A study published in November 2014 found that targeted therapies that block PD-1 receptors are successful in treating bladder cancer. The researchers used anti-PD-L1 antibody drug to target tumour in bladder and found high response rates from the immune system of the patients. The drug was considered a breakthrough by the US Food and Drug Administration in February this year.

Clinical trials on targeted drugs are on full-swing across the world and the key players include global pharma giants such as Novartis, AstraZeneca and Pfizer, among others. According to a report by IMS Institute for Healthcare Informatics released in 2014, there are currently 374 experimental cancer drugs in mid-stage trials, and the global spending on oncology drugs is expected to reach US $100 billion in 2018.

Although personalised therapy for cancer is well known, the concept can be used for treatment of diabetes, heart disease and Alzheimer’s that are often caused due to genetic factors. To support studies on personalised treatment for bowel cancer, asthma, hypertension and lupus, UK’s minister for life sciences, George Freeman, in January this year unveiled a US $21 million funding. That month, US President Barack Obama also announced a plan for his country to be a world leader in precision medicine.