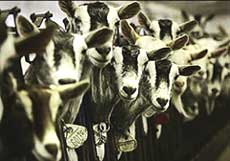 the london -based European Medicines Agency (emea) has turned down a proposal to market a drug derived from genetically modified (gm) goats, saying the product hadn't been tested enough. us -based gtc Biotherapeutics has spent almost 15 years breeding gm goats whose milk contains a human anticoagulant called anti-thrombin. The company planned to market the drug under the name ATryn.

emea wanted gtc to test the drug on 12 patients, but the company presented evidence only from five. The agency also said gtc had done too few studies to assess whether patients developed antibodies in response to ATryn. emea, a European Union agency, is responsible for evaluating and supervising new medicines.

ATryn has been designed for people lacking a gene that keeps the blood thin, according to gtc spokesman Tom Newberry. Though blood-thinning drugs such as Warfarin are available, these can raise the risk of bleeding to death during childbirth or surgery. At such times anti-thrombin itself is used, the only present source of which is human blood.

But proponents of gm technology say that farming for drugs, some of which cost tens or even hundreds of thousands of dollars a year per patient, could substantially reduce their prices.

emea's decision could be significant for other gm drugs in the pipeline. For instance, a Dutch biotech company, Pharming, is awaiting us approval for an antibacterial agent produced in the milk of gm cows.