Getting to the core 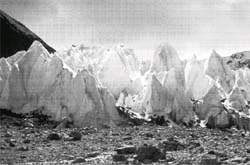 The drilling has yielded a highly-detailed record of the last 1,000 years of Earth's climate in the high Tibetan Plateau. "We think this is an alarming sign," says Ellen Mosley-Thompson, professor of Geography at the Ohio State University, usa, and co-author of the study that was published in the journal Science .

She is also the member of the team, led by Lonnie G Thompson, professor of geological sciences at the Ohio State University, usa . The international team, including American, Chinese, Peruvian, Russian and Nepalese members, extracted the cores during a 10-week, 1997 expedition to the region.

Three cores were drilled through the Dasuopu Glacier, a 2 km-wide ice field, spread on a flat area on the rim of Xixabangma, 8,014-metre peak on the southern edge of the Tibetan Plateau. "This is the highest climate record ever retrieved," explains Lonnie Thompson. "It clearly shows a serious warming during the late 20th Century, one that was caused, at least in part, by human activity".

"At this moment both Lonnie Thompson and Yao Tandong are in central China attempting to drill another Tibetan ice field," Mosley-Thompson told Down To Earth . The researchers divided the three cylindrical cores and were able to identify annual layers for the last 557 years. Samples from these layers were analysed for dust concentrations, chemical composition and oxygen- and hydrogen-isotope ratios. The isotope ratios let researchers extrapolate the air temperatures present when the ice was formed. Dust concentrations give an indication of dryness or wetness in the region, and the analysis of chlorides, sulphates and nitrates provided clues about volcanic activity, fossil fuel burning and desertification.

The data points to the impact human activities have had on changing climate in the region. Core samples covering the last century reveal a four-fold increase in dust trapped in the ice, suggesting an increase in both drying and desertification in the region.

The real surprise came with the monsoon records the core revealed. Changes in the monsoon cycle can bring catastrophic flooding or droughts. The core showed a clear record of at least eight major droughts caused by a failure of the south Asian monsoon, the worst of these a catastrophic seven-year-long dry spell that cost the lives of more than 600,000 people. The core data showed that in 1790, the cycle changed, the rains lessened and drought took hold in the region, a condition that continued for seven years until 1796 when the monsoons returned.