Erratic eruptions of gushing hot springs have been recorded before the occurrence of tremors. Though scientists are not sure why this happens, the phenomenon can help in forecasting earthquakes. 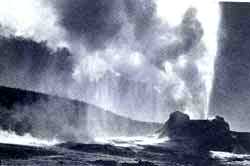 ANALYSIS of scientific data reveals that geysers -- the hot springs that intermittently throw up columns of water -- can indicate in advance the arrival of an earthquake (Science, Vol 257 No 5075). Scientists Paul G Silver and Nathalie J Valette-Silver of the Carnegie Institution in Washington DC say variations in the intervals between eruptions can signify an imminent earthquake. Data of eruption variations of the Old Faithful geyser in Calistoga, California, show at least some tremors in the seismically active regions of the state have had such observable precursors in geyser eruptions.

Scientists have often pulled at straws trying to forecast earthquakes. One method of detecting precursors presently being studied in the US, the former Soviet Union and China is by monitoring ground water levels. However, hydrothermal phenomena -- such as temporal variations in geothermal wells -- have been less commonly used. Measuring changes in the interval between eruptions (IBE) of geysers has been suggested previously as a means of predicting earthquakes.


The Calistoga geyser is located in an area known for geothermal activity and has been studied by scientists for more than 65 years. The eruption times of the Calistoga geyser have been recorded manually from 1973 to 1979 to the nearest minute for about 10 hours each day. Since 1980, the eruptions have been automatically and continuously measured by using an infrared sensor.

After analysing some 20 years of data of the Calistoga Geyser, Silver and Valette-Silver showed deviations in the IBE during a one-to-three-day period preceded the three largest earthquakes within a 250-km radius of the geyser. The scientists found precursors for the Oroville earthquake of August 1975, the Loma Prieta quake of October 1989 and the Morgan Hill earthquake of April 1984.

The IBE variations always began before an earthquake occurred. The largest eruption interval-lengthening events corresponded with the Loma Prieta and Oroville quakes. The Calistoga geyser's IBE increased from 90 minutes to 150 minutes before the Loma Prieta earthquake and returned to the pre-earthquake frequency after about 70 days. Before the tremor, the IBE rapidly doubled within four days. In the case of the Oroville tremor, the IBE increased from 50 minutes to 120 minutes and returned to 50 minutes after about 40 days. The IBE began doubling a day before the event. One day prior to the Morgan Hill earthquake, the IBE changed from a steady 40 minutes to a pattern of 25, 40 and 50 minutes and the frequency persisted for 6 months.

Why the IBE changes before an earthquake has not been clearly understood. But the scientists postulate the variations are probably controlled by changes in the rate at which a deep, high-temperature reservoir within a fracture zone recharges the immediate reservoir of the Calistoga Geyser. During an earthquake, the partial draining of the underground reservoir could cause increased intervals between eruptions.