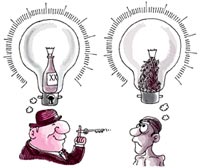 Under the Trade-Related Intellectual Property Rights (trips) Agreement of the World Trade Organization (wto), champagne is identified with the particular wine-producing region of France. Scotch whisky is similarly recognised as being purely Scottish. But products such as basmati rice, Darjeeling tea, Kolhapuri slippers and Kanchipuram silk saris -- though originating exclusively from specific areas of India -- do not get geographical indication (gi) protection within the trips pact. As a result, they continue to run the risk of inappropriate commercialisation in the global market.

India, the eu and 21 other wto members are hoping to eliminate this inconsistency by getting the gi shield extended to products other than wine and spirits. "Consultations are in progress and the eu is pursuing the case aggressively," disclosed an official of India's Union ministry of commerce and industry. It may, however, be noted that with the Cancun ministerial just a few weeks away, there has been no forward movement in negotiations on the subject.

A gi is a sign used on goods that have a specific geographical origin and possesses qualities or a reputation that are due to that place. The false use of gis by unauthorised parties can be detrimental to both consumers and legitimate producers. While the former are deceived into believing that they are buying a genuine product, the latter suffer a loss of valuable business and possible damage to their reputation.

Members in favour of extension of gi protection include Switzerland, India, Bulgaria, the eu and other developed and developing countries. This bloc argues that gis can be used to promote the export of valuable products and prevent misappropriation. These countries also consider it a matter of fairness that such additional protection is not limited to alcoholic beverages. On the contrary, the principal opponents feel that expanding additional protection is beyond the mandate of the negotiations. This camp comprises countries from the Americas (such as the us and Chile), Australia, New Zealand and other bulk exporters of agricultural products.

Negotiations on the matter came to a standstill earlier in the year. In a bid to resolve the impasse, it was agreed on May 14, 2003, that informal consultations would be held under the leadership of wto director-general Supachai Panitchpakdi. Widening the scope of gi protection to cover other products is one of the implementation issues that need to be addressed within the current round of negotiations. Such issues usually refer to compliance with one's negotiated obligations. But developing countries view it in terms of correcting imbalances in the Uruguay Round wto agreements. In the gi standoff, wto members are not split along the usual North-South lines. Rather, they are divided between the old and new world countries.

"The outcome of the gi parleys will depend on what happens in (the talks on) agriculture," pointed out the commerce ministry official. Apparently, Switzerland and the eu have explicitly linked the issues. Even as allowing greater market access in agriculture will open their markets to competition from imports, they hope to offset this by securing additional protection through gis on their products. To be sure, it does appear that breaking the gi deadlock would require some trade-offs in negotiations on agriculture. Yet the move to connect the two topics may further delay an agreement on gis. The reason is that consensus on agriculture -- the single most important issue -- is unlikely to be evolved before December 2004, when the current round of negotiations ends.

In India, a law protecting the gi of goods was passed on December 30, 1999. The Geographical Indications of Goods (Registration and Protection) Act, 1999, seeks to provide better protection of gis relating to goods in India. The department of industrial policy and promotion of the commerce ministry has also recently prepared and notified the rules to carry out the provisions of the act. The Geographical Indications of Goods (Registration and Protection) Rules, 2002, lay down the criteria and procedure for registration of products known and distinguished by their area of origin.

Significantly, the Indian laws on gi offer protection to goods only in the domestic territory. The country's products are still vulnerable in the international market -- as was experienced in the case of basmati rice in the us. Unless the provisions of the trips agreement are amended to extend protection to other products as well, this risk will remain. gi is an intellectual property right equal to trademarks, designs or patents. But in its present form, it is the only one that discriminates between various categories of products.