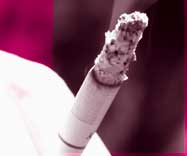 India is the second largest producer and consumer of tobacco in the world. This despite the country being one of the first signatories of WHO's Framework Convention on Tobacco Control


• Surveys providing information on tobacco use are rare; basically, studies on heart diseases and lung ailments are used to collect data


• There are an estimated 250 million tobacco users in the nation

• The prevailing tax system does not discourage the use of tobacco, as the contribution from non-cigarette products is low: around 20 per cent of the total tobacco excise collection

• If non-cigarette tobacco products were taxed like cigarettes, it would generate revenue worth Rs 20,000-30,000 crore per year. It would also discourage the use of most harmful tobacco products

• Environmental cost of tobacco cultivation is very hefty: to treat one kilogramme (kg) of tobacco leaves, nearly 6-8 kg of high quality dry fuelwood is needed; according to an estimate of the Indian Institute of Forest Management, Bhopal, between 1962-2002, fuelwood used for treating and manufacturing tobacco destroyed 868 million tonnes of wood. In calorific terms, the wood energy lost is enough to run a thermal power plant to provide electricity to Delhi and western Uttar Pradesh for an entire year

• As per the Indian Agricultural Research Institute, when grown singly, tobacco is the most erosive crop, causing a loss of 45 kg of top soil of every 0.4-hectare per year

• Pesticide and fertiliser consumption in tobacco farms is about 1.5-2 times greater than that of cereal fields. Reason: as tobacco is not native to India, it attracts a variety of pests. These insects also attack the neighbouring crops: tobacco growing areas in Andhra Pradesh are affected by at least 12 more fungal and viral diseases than places where tobacco is not grown

• Tobacco cultivation also has social implications: about 20,000 children are forced to work in tobacco farms, and 27,000 work in beedi-making and cigarette-packing units