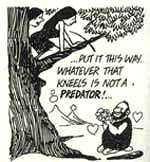 FOR MOST girls, fear emanates from an under-the-bed-world. In an experiment in which children aged three to four years were asked about their night-time fears, significantly more girls than boys referred to an underworld peopled with ogres and monsters, says Richard Coss, a psychologist at the University of California, Davis.

He suggests this reaction can be traced to prehistoric times when females spent more time up in trees than males. This, say some scientists, is probable because the female's lighter frame and more flexible feet were better suited to a life in the trees (New Scientist, Vol 139 No 1888).

If females slept on trees, it would make sense if they -- and not males -- were genetically programmed to fear attacks from predators from below, says Coss.