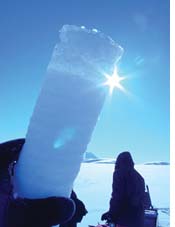 so far climate change study models have ignored how carbon emissions contributed to the melting of glaciers. This was not part of climate study models since reliable data on soot emissions was absent. There was, however, evidence for the glacial melt in the Arctic due to the black carbon emissions from the us in the late 19th century. The industrial soot was said to have affected the reflective nature of the ice, making it vulnerable to melting. The same could be happening in the Himalaya, suggesting there is a need to analyse the carbon contribution to glacial melt.
A study by the Desert Research Institute (dri), us, says the amount of soot increased between 1850 and 1950, melting of glaciers in Greenland. The level of soot was eight times higher than normal (Science online, August 9, 2007) at some point.Last year, another study in Science found Greenland's glaciers melting into the Atlantic faster than predicted, necessitating the need for more accurate models in predicting climate changes. "Warming from soot is still significant and will improve climate models if soot is included," says Joe McConnel, a researcher with dri. "As these models are used to predict the future (climate) so the better and more complete the models are the more accurate could the predictions be," he adds.
Back home in India scientists are uncertain about the accuracy of this approach. "This is speculative. Glacial melt has to be studied in a more holistic manner. While the melting rate is being studied, the rate of deposition of snow which may be changing due to change in moisture levels is not being looked into," says M M Saini of the Ahmedabad-based Physical Research Laboratory.

Despite this scepticism, satellite data shows many glaciers like the Gangotri have retreated. "We should have more ground level data to prove the claims from satellite data that the Himalayan glaciers are melting," says K K Raina, formerly with the Geological Survey of India. "Unlike the Greenland glaciers, the Himalayan glaciers have thick layers with carbon. This prevents melting," he points out. Saini, however, says the yearly deposition of snow as well as carbon in the Himalayan glaciers must be studied. "The glaciers are hugely different in terms of the terrain, the hardness of the ice and the carbon deposition. These need to be studied independently," he says.

A study by the Scripps Institute, California, (Nature Online, August 2, 2007) says atmospheric soot in the brown clouds of Asia have resulted in 50 per cent warming between 1 to 5 km in the atmosphere. The Himalayan Hindu Kush glaciers are located in this domain. There is evidence of atmospheric warming due to soot in the Himalaya and satellite data too confirms the receding of glaciers.

Recently, the flow in glacier-fed rivers has increased significantly and the flow was not in tune to the rainfall received (Unprepared, Down To Earth September 15, 2007). A substantial analysis of this using the carbon model can indeed be of help the communities dependent of the glacial rivers.