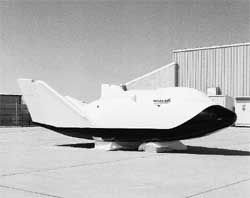 national Aeronautics and Space Administration (nasa) has come up with 'gliding lifeboats' that could return astronauts to earth if the international space station ever needs to be evacuated.

The craft will undergo its first unmanned space flight in 1999, and is due to be operational by 2002. It features a wingless, lifting body design -- first taken into account by nasa in 1960 -- during research into re-entry vehicles, that could be flown to a controlled landing rather than the familiar Apollo-type splashdown.

The newly-designated x-38 uses a new approach for landing. Previous manned lifting bodies landed on runways, using conventional landing gear, but for the x-38, the weight would have been too great and resultant landing speed too high. To overcome the problem, a computer-controlled, steerable parafoil was used. It employs the Global Positioning Satellite system for navigational accuracy, with skids fitted to the underside of the vehicle taking the place of the traditional undercarriage.

The lifting body can be controlled aerodynamically, providing the crew with more emergency re-entry options than a capsule, ensuring a faster landing time and reducing requirements of life-support systems .

It features extensive use of composite graphite-materials, producing a strong, light-weight structure, with thermal protection provided by the same tiles used by the space shuttle. One of the primary design goals was simplicity of operation. The flight control system is fully automatic with an emergency separation time of just three minutes from the craft's docking point on the space station.

The vehicle will be able to carry six astronauts with the help of certain manual control functions such as selecting landing site, inputting guidance commands and even steering the parafoil.

nasa is investigating the possibility that x-38 could be built by private industry rather than state funds. The company would retain ownership of the spacecraft and lease them to governments.