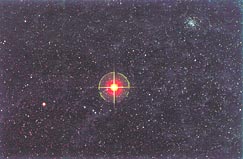 The cosmos is always throwing up surprises -- extrasolar planets, super massive black holes, and now it is diamond dust. Yes, diamonds, measuring just a few nanometers, have been recently found in outer space by astronomers from the Baton Rouge-based Louisiana State University.

The existence of diamonds in outer space is not surprising. Carbon exists in many parts of the Universe and extreme pressure and densities (the conditions under which carbon transforms into diamond) are common too. Therefore, it seems practical for the precious stones to be found there. About 15 years ago, astronomers first detected the presence of diamonds in meteorites. One theory even traces their origin to supernova explosions.

The Louisiana university researchers found that diamond dust is widespread throughout the space. They used the Hubble space telescope and data from the international ultraviolet explorer satellite to examine the light from stars that are located behind huge clouds of dust. The spectral pattern in the ultraviolet light suggested that there are diamond grains in every direction.

The results of the analysis, however, are not yet universally accepted. Several astronomers claim that the identification of the ultraviolet pattern is not foolproof and there are some organic molecules that could easily mimic the diamond patterns. A further study of light is expected to clear the controversy. Nevertheless, just the thought of about one kilogramme of diamond in our galaxy (the amount estimated to have accumulated) is fascinating.