Powder used in surgeons' gloves can cause inflammation andpost-operative infection 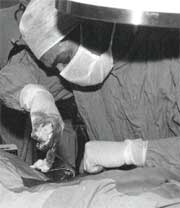 latex gloves used by surgeons contain a starch-based powder to make it easier to slip them on and off. Significant quantities of the powder can be left in surgical wounds causing serious inflammation, allergic reactions, and an increased risk of post-operative infection. A special supplement published by The European Journal of Surgery lists the health hazards posed by the powder. These include false diagnosis of cancer and hiv , that can cause untold misery and trauma to patients. The powder can lead to the formation of inflamed lumps of tissue that get mistaken for tumours.

It was long believed that the powder was safe, but as Klaus Junghanns, professor of surgery at Ludwigsburg Hospital, Germany, puts it, "We have accumulated enough scientific data to conclude that glove powder has to be banned." uk and the Scandinavian countries have started the phasing-out of powdered gloves. But they are widely used in other parts of the world including the us. Hospitals in the us are reluctant to abandon powdered gloves because they fear that a sudden change will arouse the suspicions of litigious patients, says Karl-Erik Giercksky, cancer specialist at the University of Oslo, Norway.

Starch powder can slow up the wound healing and interfere with the function of the immune system, says Lena Holmdahl, an expert on wound healing at the University of Florida, Gainsville. This increases the risks of post-operative infection. She has also gathered evidence that bacteria are spread in the glove. "Given the availability of powder-free alternatives, there is no justification for the continued use of powdered gloves," she adds.