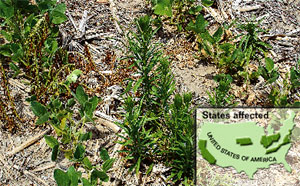 marestail, the glyphosate-resistant weed, continues to spread in the us. So far, it has claimed about one million hectares (ha) in about 12 states and recently, scientists of the University of Nebraska at Lincoln, announced the presence of marestail in Nebraska.

Glyphosate is a non-selective herbicide used on many food and non-food crops, which means it can be used on all kinds of weeds. Pitched as the 'greatest herbicide', overuse has led to resistance. Earlier, weeds like ryegrass and goosegrass were resistant to the herbicide, but now there are 28 other glyphosate-resistant weeds.

The consumer factsheet for the us for glyphosate shows it is among the most widely used pesticides. In recent years, around 8.1 million ha was treated with glyphosate."Widespread use of glyphosate herbicide, developed by Monsanto under the brand Roundup Ready a decade ago, has resulted in pressure on weed populations, which also has led to a resistant variety," says Steven Knezevic, integrated weed management specialist.

Until last year, marestail resistance was confirmed in 11 states including California, Ohio, Illinois and Indiana. The problem was not taken seriously before. "Quite often, as resistance developed, we had a new herbicide coming that was better than what we had. Because of this, farmers had no reason to take the issue seriously," says Ford L Baldwin, a weed consultant. But the marestail problem has assumed huge proportions and is posing a threat to the entire farming system in the us.

Glyphosate-resistant marestail was first detected in Delaware in 2000 in soybean fields. It is estimated that 40,468 ha out of the state's 226,625 ha are infected with marestail. "The location where this was identified had been treated intensively with glyphosate for 15 years, with three or four applications a year. In just the last five years, we've seen the population of marestail increase 10-fold," says Kurt Hembree, a University of California Davis cooperative weed management farm advisor.

Wind is the primary carrier of marestail seed, which is a major reason for the spread. Besides, there is no visible difference between the resistant and non-resistant varieties of marestail. Hence, the only sure way to tell if marestail is glyphosate-resistant is to spray and see if marestail dies.