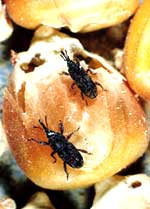 In an apparent setback to the genetically modified (gm) foods industry, Kenya has destroyed its first gm maize crop planted in open field trials. The move followed the detection that a technician had sprayed Furadan, a restricted pesticide, on the maize modified to resist attack by insects called stem borers. These insects destroy up to 12 per cent of Kenya's maize harvests annually, amounting to us $76 million.

The trials were part of the Insect Resistant Maize for Africa (irma) project, aimed at developing conventional and gm maize varieties to resist stem borers. irma is a joint project of the Kenya Agricultural Research Institute and the International Maize and Wheat Improvement Center, funded by us Syngenta Foundation for Sustainable Agriculture. Kenya's agriculture secretary and chair of its National Biosafety Committee, Wilson Songa, said use of Furadan could compromise the validity of the trial's results. irma researchers hoped to release the maize to farmers by 2010. Earlier, critics had said Kenya shouldn't begin the trials without a regulatory framework for gm crops.