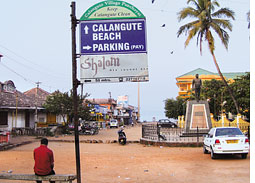 The Goa Coastal Zone Management Authority (gczma) submitted the report to the High Court of Bombay at Goa on January 28.

The report also says that building construction is rampant in the area, even though it has been earmarked as 'no development zone' in crz-iii in February 1991.

In 1999, the state government made it clear that no authority, including panchayats, had the permission to approve new constructions or houses in coastal villages that fall within 500 metres of high tide line. "Coastal area is prime land. So local people as well as those in power often violate the law under the guise of renovation or repairs of existing structures, hotels, shops and resorts," says state environmental lawyer Norma Alvares.

gczma says the data in the report, prepared by an external agency called Remote Sensing Instruments, may slightly vary from the ground realities. There may be a few degree of location error, which may crop up whileverifying the report with the survey plans, says gczma member secretary Michael D'Souza.

The authority is currently verifying the report and will soon send it to coastal village panchayats and municipalities for identifying structures that have come up inside the high tide limit area after 1991. The report, however, does not cover crz areas in Tiracol, Panaji, Vasco and Velim towns.

The report was submitted in response to an October 2006 ruling of the High Court of Bombay, Goa, on a petition filed by the ngo, Goa Foundation. The court had then directed the state government to stall all new constructions in the crz iii.

The court had also said that until the administration completed its survey no new licence for any construction in crz-iii should be issued except for repairs and renovation of the existing houses.