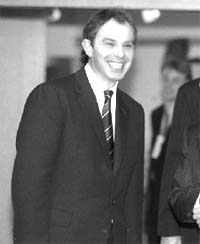 the prime minister of uk, Tony Blair, has announced a review of the country's energy policy in a written answer to the parliament on June 25. He announced the setting up of a review group under the Performance and Innovation Unit ( piu ) of the cabinet office that will report within one year. Though Blair's statement claimed the government wants to ensure 'secure, diverse and reliable energy supplies', critics point out that the purpose of the review could be to bring nuclear power back on the agenda.

Ironically, just two days before sweeping the polls, Blair had committed not to increase the nuclear power capability of the country. In a reply, therefore, the politically incorrect word 'nuclear' was confined to a supplementary 'project scoping' note, in which Blair asked for a review of the role of the nuclear industry .

Mark Johnston representative of the uk -based non-governmental organisation, Friends of the Earth, said, "We will fiercely oppose any new proposals for nuclear power stations. Renewables can deliver more power for less cost."

Speculation has been rife ever since pro-nuclear Brian Wilson took over energy minister. Analysts fear that Wilson could not only allow the building of more nuclear power stations, but also permit new companies to enter the sector. "Proposals for any kind of power station, including nuclear stations, are welcome and they make a lot of sense," he told mediapersons. He also talked of a programme for new nuclear stations being built at existing power plant sites. Interestingly, Wilson's constituency houses a 1,288-megawatt nuclear power station.

After Blair's announcement of the review, the state-owned British Nuclear Fuels ( bnfl ), which is running losses, has demanded the construction of at least six new nuclear power plants. bnfl has already bought new technology from the us.

uk 's last nuclear station was built in 1996 in Suffolk. Nuclear power makes up for nearly one-fourth of the countries power production. On June 29, 12 European Union ( eu) countries, under the Ospar Convention, which asks the signatories to cut nuclear waste discharge to near zero by 2020, had demanded that Britain shut down reprocessing of nuclear waste to prevent further radioactive discharges into the sea. As it is the country has a poor record with regard to nuclear plants. In fact, the w orld's first commercial nuclear power station at Sellafield, set up in 1956, may be shut down because of this. Greenpeace, an international pressure group, has criticised the uk government for planning to set up new power plants while finding itself unable to handle the waste generated from existing ones.