Going round and round

Earth is getting wider near the equator 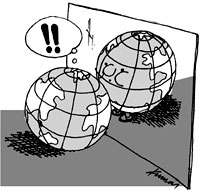 our planet has been getting a little bulky around the equator since 1998. The intriguing observation has been made by Christopher Cox from the Maryland-based technology company Raytheon, and Benjamin Chao from us National Aeronautical and Space Administration. The researchers analysed observations made by nine satellites and found that Earth's gravity around the equator has become slightly stronger. This implies that its circumference has expanded by something like a millimetre.

Cox and Chao came up with numerous reasons to explain the change. They reckoned that the change cannot be due to the flow of the Earth's semi-molten magma. Ice-cap melting as a result of global warming could have released more water to equatorial regions, widening the Earth. But the researchers found that the rise in sea level was not enough to induce the change.

According to them, there can be two possible reasons behind the change. One is that changes in ocean circulation have shifted a larger mass of water towards the equatorial regions. The second cause could be the flipping of the Earth's magnetic field. These electromagnetic jerks occur about once a decade, when the Earth's liquid metal core moves. Such a movement occurred in 1999, which could have resulted in the transfer of molten metal away from the poles towards the equator.

The researchers assert that one thing is almost certain: the planet's weight problem is probably just a passing phase and is not a result of human activity. "We think it's part of long-term natural variation in climate and the oceans, and things will probably return to normal again," says Chao. In fact, satellite orbit measurements made using lasers in 1980s show that the Earth was gradually becoming more spherical. This was happening with the ice caps melting after the most recent ice age. With the weight of the ice caps removed, the poles were rising back to their original position after being under pressure for a long time. This trend continued till 1998, when suddenly the Earth again started becoming robust from the middle. At present, the Earth is shaped like a pumpkin -- wider at the middle and narrower at the poles. The difference, which is a mere 20 kilometres, is due to the fact that the Earth is spinning fast and made largely of molten rock.