Going up in smog 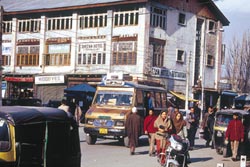 A recent study by the Jammu and Kashmir State Pollution Control Board (spcb) shows that vehicular pollution has reached alarming levels in parts of the Kashmir valley.

The state government has reacted by directing petrol and diesel pump owners not to provide fuel for vehicles without pollution under control certificates. The spcb has found that vehicular emissions contribute to 80 per cent of the overall air pollution. An increase in the number of vehicles, unregulated use of old vehicles and faulty pollution-checking mechanisms have led to the deterioration of air quality.

The number of vehicles in the valley grows by five per cent annually. In 2002, the government had ordered the phasing out of minibuses that were more than 13 years old. Later, however, these obsolete vehicles were allowed to ply for one more year.

The poor air quality is likely to hit the state's economy, especially the tourism industry, just as there are hopes of revival after a decade of terrorism. "People come here to inhale fresh air. Who will come if the air quality is bad?" asks Riyaz Ahmad, a houseboat owner.