Recently the banks of river Gomti in Lucknow were unusually abuzz. Some people were struggling to wade through the 'sewage-enriched' river to scoop up thousands of dead fish; the bystanders looked on, probably contemplating the peril their city's lifeline was in. The river is one of the major sources of water for Lucknow... 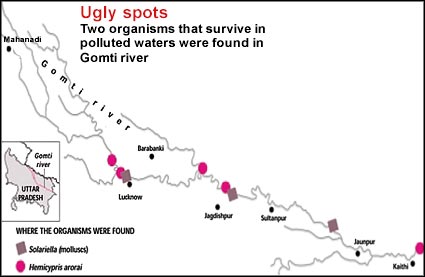 recently the banks of river Gomti in Lucknow were unusually abuzz. Some people were struggling to wade through the 'sewage-enriched' river to scoop up thousands of dead fish; the bystanders looked on, probably contemplating the peril their city's lifeline was in. The river is one of the major sources of water for Lucknow.

The fish had died as dissolved oxygen level of the river water had dipped too low. Officials of the pollution prevention board blame untreated muck for the sad situation. S C Rai, the mayor of Lucknow, however refutes the claim: "The mass killing of fish has not been caused by sewage; it is industrial effluents discharged by paper mills, sugar factories and distilleries in the upstream areas of Sitapur and Lakhimpur-Kheri that spelt doom for the aquatic life."

The dissolved oxygen levels dipped to as low as one milligramme per litre (mg/l). A minimum level of four to six mg/l is considered essential to sustain aquatic life. The Uttar Pradesh Machuhara Sangh has demanded immediate government action to combat the problem. "If the authorities fail to improve the situation by August 2003, we will start removing hyacinth plants and other polluting particles," says the Sangh's president Mathura Prasad Nishad.

Over the years, Gomti has become the most polluted river in Uttar Pradesh. Monitoring by the state pollution control board reveals the water is unfit for consumption. The extent of pollution is such that the river's biodiversity is being affected. A marine species of molluscs -- Solariella -- was recently found in the river. This is alarming, as Solariella is endemic to coastal waters that ordinarily have high levels of ph (read: alkaline/ polluted conditions). The presence of Solariella was revealed during the first-ever biomapping of the river done by the Geological Survey of India (gsi), Lucknow.

According to the gsi report, the invertebrate may have been introduced in the river by birds like waders. But since then it has been able to survive in the river's freshwater due to high levels of ph. In other areas such as Madhavpura, Isauli and Bashariaghat, gsi scientists found Hemicypris arorai -- another organism that survives in highly alkaline water (ph values of 8.2 to 9.1). The high ph levels of these areas were mainly attributed to the use of fertilisers in nearby fields. To further prove that pollution is changing the river's biodiversity, gsi scientists tested water samples from the tributaries of Gomti. The samples were found to be free of Solariella and H arorai.

According to experts, the riverine biota being affected by pollution is an indicator of an impending ecological disaster. The government should conduct further biomapping of the river. To date, the authorities have failed to clean Gomti despite spending crores of rupees. On August 16, 2002, the Supreme Court rejected the plea of "lack of resources" made by the state government and ordered it to construct oxidation ponds in the towns of Pilibhit, Lakhimpur, Sitapur and Barabanki to treat industrial waste and sewage before they are discharged into the river. However, the order has not been implemented as yet.