A miss on rural health 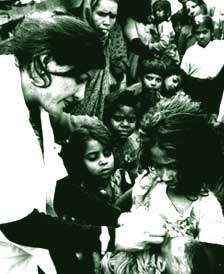 the much-hyped National Rural Health Mission (nrhm) was launched on April 12, 2005 by prime minister Manmohan Singh with the aim to "deliver healthcare to all". The programme will be operational for seven years (2005-2012). Singh said the event marked the fulfilment of some of the most crucial promises made under his government's National Common Minimum Programme. But experts seriously doubt the chances of the plan's success. They wonder how a "population stabilisation" centric effort will fulfil overall healthcare needs and allege that the government has ignored expert opinion in formulating nrhm. Branding it as too ambitious, they also raise doubts about its implementation and monitoring.

nrhm focuses on rural areas of 18 states. Its key aims include increasing health sector funding, providing a trained female health activist to each village and strengthening rural healthcare centres. It allows states to design their own delivery models and adopts a synergistic approach of linking health to the determinants of good health: nutrition, sanitation, hygiene and safe drinking water. On the face of it, the mission seems overwhelming but a closer scrutiny reveals many loopholes.

J N Ghosh, assistant director, Union ministry of health and family welfare (mohfw), makes no bones about the fact that nrhm has been launched for "population stabilisation" and a whopping Rs 6,713.02 crore has been allocated to it for 2005-2006. Experts are exasperated. "How can one think of providing healthcare facilities, when the focus of the mission is population control? The funding, too, is coming from the reproductive and child healthcare programmes. The mission is nothing but new wine in an old bottle," claims Ritu Priya Mehrotra, associate professor, Centre for Social Medicine and Community Health, Jawaharlal Nehru University, New Delhi. Debabar Banerji, director of Nucleus for Health Policies and Programmes, a New Delhi-based non-governmental organisation (ngo), concurs: "The mission's launch is a gimmick to placate the opposition. How can one expect a good programme from officials who are oblivious to the harsh realties of healthcare? They always ignore expert advice. Even while the mission was being evolved, many discussions took place with the civil society but none of the suggestions were incorporated. In fact, with it's over-emphasises on population control, nrhm may cart off the meagre healthcare facilities being provided to the poor at present."

But the government is confident. Ghosh asserts: " The programme would, but naturally, be effectively implemented. As for monitoring, the health indices would prove its triumph." Community health experts are not so sure. Thelma Narayan, coordinator of the Community Health Cell, Bangalore, an ngo, points out: "The plan is too ambitious, which also makes it vague. The government wants to have a health plan for each village; this is romantic thinking. It doesn't have the capacity. The nrhm draft has no provisions for implementation." Past experiences also spell caution. The fate of the major initiative to establish primary health centres in all villages, undertaken by various governments since independence, is noteworthy: 85 per cent of India's rural population has no proper healthcare facilities.

Ghosh says a major strength of nrhm is the provision of a female Accredited Social Health Activist (asha) in every village/large habitat. ashas will be chosen by panchayats and will be accountable to them . They will receive performance-based compensation from the Union government. But Mehrotra believes this will be their undoing, as they will always be viewed as government employees and won't enjoy much credibility. Besides, their training, and supervision will rest with the existing public system, with all its inadequacies.

Coordinating with state governments will also be a major challenge for nrhm. "Health is a state subject. At present, even if funds are available, the state health departments refuse to use them. How will the Union government ensure that they effectively implement nrhm? The political commitment has to be transferred to the bottom. At present there is no scope of public accountability," points out Narayan. She suggests involving the civil society in implementation and monitoring. But Ghosh is non-committal: "We have not thought about how to involve ngos in the process." "People's ownership of the mission" is what N H Antia, director, Foundation for Research in Community Health (a Pune-based ngo) recommends. He says a mere increase in health outlay won't clear the distortions afflicting the health sector