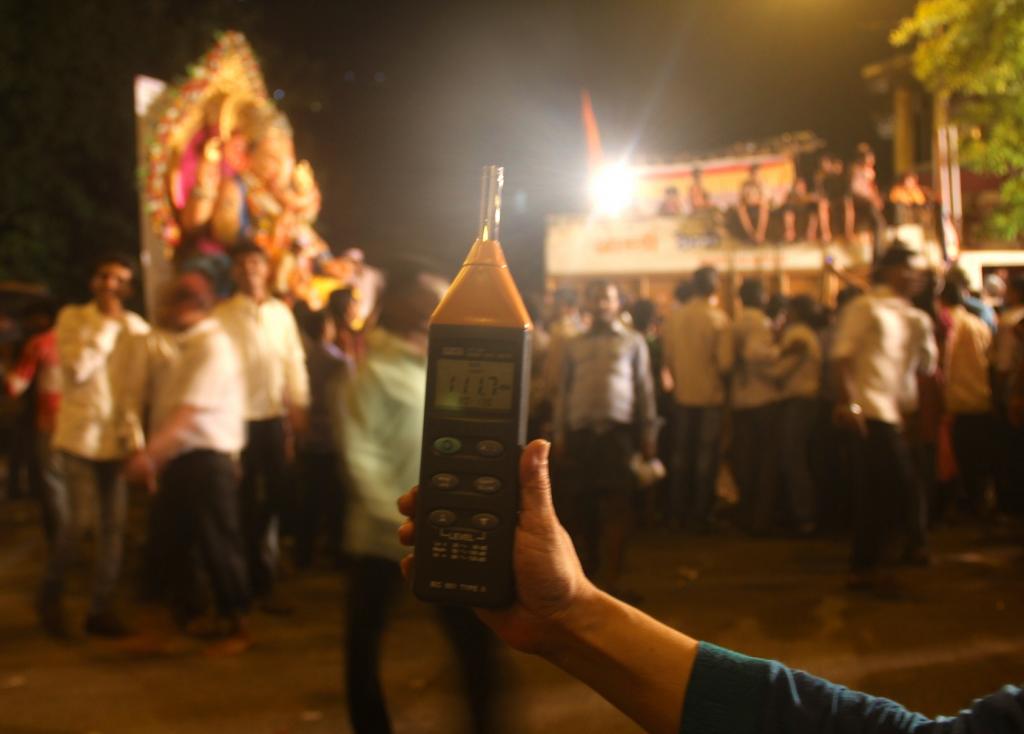 This year, too, the state failed to curb noise levels across Mumbai, especially on the first day of Ganesh Chaturthi immersions. Credit: Wikimedia Commons

On August 24, in an unprecedented move, the Maharashtra government accused Justice Abhay Oka—a senior judge of the Bombay high court—of "harbouring serious bias" against it. It wanted Justice Oka to be withdrawn from hearing a noise pollution case and a group of petitions about increasing menace of noise pollution to be transferred to another bench. He was heading a division bench that recently camedown heavily on the state for trying to dilute the Noise Pollution Rules and taking no action against the violators of the norms.

Just three days after Chief Justice Chellur withdrew the case from Justice Oka and placed it before a bench of Justice Anoop Mohta and Justice Girish Kulkarni, she brought him back and set up a full bench to be headed by him. This change of stand is a result of collective criticisms the court and the state government faced from lawyers and citizens alike. They all took to social media to condemn such actions and rallied in support of Justice Oka.

In August 2016, the high court had given directions for strictly implementing the Noise Pollution Rules, 2000. It held that areas not less than 100 metres around educational institutions, hospitals and courts should be deemed silence zones. In March this year, the division bench consisting of Justice Abhay Oka and Justice Anuja Prabhudessai slammed the state for failing to effectively implement its directions. It observed that despite having adequate supply of decibel meters in each police station across Maharashtra, the device was hardly used in major cities to look into complaints against noise. It also found that between January and February 2017, out of 2,218 complaints received in the cities, only 1,321 complaints were addressed using decibel meters.

Justice Oka had insisted that the noise pollution rules be adhered to and action be taken against the violators. What perhaps bothered the state government most was the judge’s refusal to accept its stand that no silence zones existed in Mumbai and elsewhere in Maharashtra after the August 10 amendment to the Noise Pollution Rules, which states: “no area shall be treated as silence zone unless specifically declared so by the state government”. The amendment by the Union Ministry of Environment, Forest and Climate Change put a question mark on the fate of silence zones across the country.

Justice Oka argued that the court’s direction is valid and needs to be followed unless a review is sought and finally decided. Currently, confusion prevails over existence of silence zones in Mumbai and the rest of Maharashtra. The issue needs to be resolved soon as loudspeakers and high-decibel noise are expected during forthcoming festivals.

According to a senior advocate, this inaction on the government’s part is because of electoral compulsions as the government does not want to irk its vote bank by enforcing noise restrictions during festivals. This year, too, the state failed to curb noise levels across Mumbai, especially on the first day of Ganesh Chaturthi immersions on August 26. The anti-pollution activists found that the decibel levels (116.8 dB wh) were even higher than that recorded on the 10th day of immersion in 2016. Moreover, the Brihanmumbai Municipal Corporation (BMC)’s noise pollution complaint system failed ahead of the Ganesh Festival.