More than a fourth of rural students opt for private schools for better education, says Annual State of Education Report by non-profit Pratham 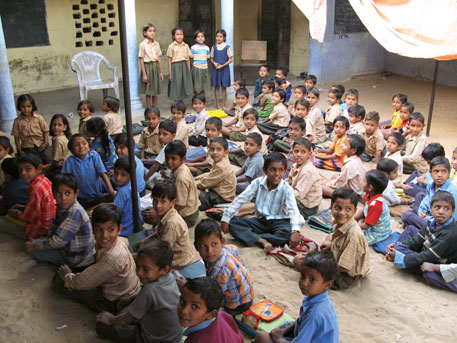 The Union government may have made right to education a fundamental right by bringing into force the Right To Education (RTE) Act of 2009, but government schools are lagging far behind in providing quality education, according to the latest report released by Delhi-based non-profit, Pratham. At the same time, the Annual State of Education Report (ASER) for rural India, released on January 15, shows improvement in infrastructure like playgrounds, drinking water facility, toilets, pupil-teacher ratio as well as serving of mid-day meal.

The ASER report says the gap between private and government schools students’ learning ability has been widening and that almost 29 per cent of rural students choose to pay around Rs 100 to private schools to get education. Besides, they also pay between Rs 100 and Rs 200 for private tuition.

The ASER report is an annual report prepared after surveying 14 states to gauge the status of elementary education. Pratham has been releasing the annual report since 2005.
As per the report, the proportion of schools that comply with RTE pupil to teacher ratio norms has increased every year, from 38.9 per cent in 2010 to 45.3 per cent in 2013. RTE provides for free and compulsory education to children of age-group 6-14 years.

In Tripura and West Bengal, more than 60 per cent of children in classes I-V take paid private tuition. In Chhattisgarh and Mizoram, less than five per cent do so.

Little improvement in ability to read, do sums

Reading ability: Students of private schools showed a little improvement in their ability to read, whereas the students of government schools showed no sign of improvement in comparison to previous year. The proportion of children in class III who can read class I books increased slightly—from 38.8 per cent in 2012 to 40.2 per cent in 2013—and this increase was seen in private school students. However, the percentage of government school students of class III who could read class I text books was only 32 per cent in 2013, almost same as in 2012.
In Jammu and Kashmir and Punjab, students are more improvement in comparison to others since 2009.

The report says the ability of class V students who can read class II students remains virtually the same since 2012 (47per cent), though their percentage has decreased slightly since 2009 (52.8 per cent).

Among children enrolled in government schools, the percentage of class V children able to read even class II level text book has shown a marked decline from 50.3 per cent (2009) to 43.8 per cent in 2011. In 2013 only 41.1 per cent students of class V could manage to read even standard II text books.

The report also says the gap between students of private schools and government schools in their ability to do basic arithmetic has also been increasing.  In 2009, the gap was nearly 14 per cent but in 2013 it increased to nearly 26 per cent.

In government schools, nearly 21 per cent students of class V can do division of lower class whereas it is nearly 40 per cent in private schools.

Nationally, there is no change observed in ability of solving two-digit subtraction by borrowing by standard III students, and is taught in class II.

In 2013, over 40 per cent of government school children in class V in three states—Himachal Pradesh, Punjab and Mizoram—could do three-digit by one-digit division problems.