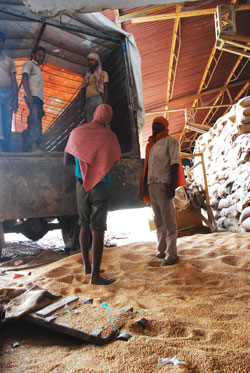 UNION Rural Development Minister Jairam Ramesh has rejected the food ministry’s suggestion that 25 per cent of wages under the rural employment guarantee programme be paid in foodgrains. Food minister K V Thomas had written to Ramesh early April, suggesting that part of the wages under the Mahatma Gandhi National Rural Employment Guarantee Scheme (MGNREGS) be paid in kind.

Ramesh has not officially informed Thomas about his decision. According to officials in the rural development ministry, an empowered group of ministers on food issue, headed by Finance Minister Pranab Mukherjee, will take the final call.

The proposal of the food ministry is being pushed at a time when the government is having trouble handling its foodgrain stocks, which will be 158 per cent more than the amount required by the end of 2012. The stocks will perish if not disbursed as the country does not have the required storage facilities.

Just a week ago on March 26, the empowered group of ministers turned down a request by the Department of Food and Public Distribution to distribute surplus foodgrains at subsidised rates to poor households. Of the 26.5 million tonnes, 10 million tonnes were for BPL households. This was in addition to the foodgrains entitlements under the public distribution system (PDS). The department’s request was based on a note from the Food Corporation of India that indicates unprecedented procurement of foodgrains by June 2012 (see table: ‘Taking stock’). Thomas admits, “We have almost thrice the amount needed to keep as buffer stock.’’ He did not respond when asked why the department’s request was turned down. 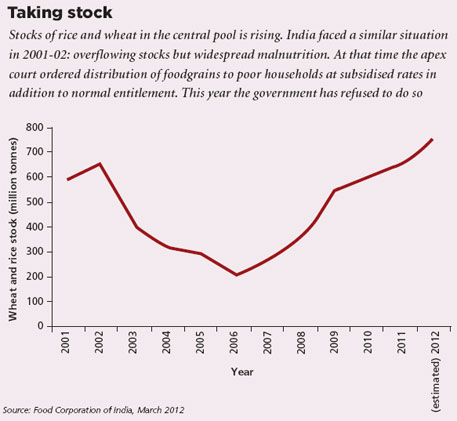 When faced with such a situation earlier in the right to food case, the apex court had directed the Centre to make additional allocation for the 150 poorest districts from the overflowing central pool to avoid starvation deaths. Last year, the same group of ministers allocated additional five million tonnes of foodgrains at subsidised rates for these districts while the food ministry wanted to export. The debate is now polarised: a group wants the surplus foodgrains to be distributed among poor households while another sees merit in using it for MGNREGS.

The proposal to pay wages in kind has invited widespread criticism. The rural employment guarantee act (MGNREGA) has a provision that allows up to 75 per cent of wage payment in kind. But it has not been used till now.

“The idea comes from the fact that there is over-saturation in foodgrain stocks. But it is a bad idea,” says N C Saxena, member of the National Advisory Council and former rural development secretary. Officials, privy to the discussions in the meeting of the group of ministers, say at the core of the food ministry’s decision is keeping the food subsidy within Rs 75,000 crore as promised in the budget. The group of ministers has already asked for revision of prices of wheat and rice to be distributed under PDS. This year, the government has also reduced allocation to MGNREGS by Rs 7,000 crore. By paying in kind, the government can make up for this shortfall.

Experts and food right groups, meanwhile, are demanding that the surplus foodgrain should be distributed to poor households as directed by the Supreme Court in recent orders. “For the past three years, there has been a concerted attempt to replace all in-kind transfers with cash handouts. And now to deal with a crisis of plenty, all those arguments will be abandoned to convert the rural wage programme into an in-kind transfer scheme,” says Biraj Patnaik, a food rights activist.

Distributing foodgrains to poor households at low rates would add substantially to the subsidy bill: Rs 32,794 crore for 26.5 million tonnes of foodgrains. If government gives 25 per cent of the wages in kind, around 24 million tonnes will be needed. This year about Rs 23,100 crore has been set aside as cash wages under the programme, which means Rs 5,775 crore worth of foodgrains need to be given as wages.

It is here the government’s creative accounting comes into play. Under the proposed wage payment in kind, government has the freedom to fix foodgrain prices. It may not give the foodgrains under the wage programme at the rate given to BPL households. “There are high chances that government will apply minimum support price (MSP) for foodgrains to be given as wage as past experience shows. This means a huge saving on subsidy but a drain on the poor people’s budget,” says Sachin Jain, a food rights activist in Bhopal. For example, the government gives wheat at Rs 5 per kg to BPL households while MSP is Rs 12 per kg. This means MGNREGA workers will bear the burden of this decision.

As most of the people working under the programme have access to cheaper foodgrains under PDS, many of them will not be willing to exchange their wage for expensive foodgrains. “Government is just forcing people to buy foodgrains at higher price to save its subsidy bill,” says Jain. In the past, India has been unsuccessful in implementing in-kind wage payment schemes in the 1970s and 2000s. Corruption in distribution of foodgrains had mired the Food for Work programme which was implemented in the 150 poorest districts in early 2000s. Many surveys found that foodgrains reached people late. What’s more, contractors were supplying inedible foodgrains. “Under MGNREGA, delay in wage payment is a concern. The same will happen to delivery of foodgrains,” says Jain. Chances are that people will not get either wage or foodgrains on time, warns Saxena.

The government’s proposal is yet to articulate how foodgrains would be distributed. But some experts working on the wage programme see merit in in-kind payment.

K S Gopal, former member of the Central Employment Council, says, “Given that half of the workers are women, foodgrains would be preferred by them. It will lead to food security.” Nikhil De, a member of the Planning Commission steering committee on MGNREGA, supports the move, too. But he puts a rider: “It also depends on the prices at which the foodgrains will be given.” That is the million dollar question.