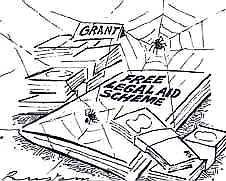 TO ENSURE poorer Indians may not wind up lining the gowns of unscrupulous lawyers, the Free Legal Aid Scheme was introduced in 1980 by the Union government. Since then, many voluntary agencies have complained of the extremely tardy implementation of the scheme, meant to benefit those with an annual family income below Rs 12,000 or who belong to the scheduled castes or tribes. Their complaints have now been confirmed by a Union ministry of law and justice review of the utilisation of legal aid funds. These are released as grants to the state governments and Union territories and the ministry study shows just three states -- Karnataka, Haryana and Gujarat -- and three union territories reported some utilisation of the legal aid money received in 1991-92 and the current financial year.

Even the professedly pro-poor Marxist government of West Bengal assissted no poor litigant last year, though it was alloted Rs 1.04 crores as Central assistance. The same goes for Tamil Nadu with Rs 91 lakhs, Madhya Pradesh with Rs 95 lakhs, Uttar Pradesh with Rs 50 lakhs and Maharashtra with Rs 43 lakhs.