The last remaining contiguous grasslands in Karnataka diverted for development 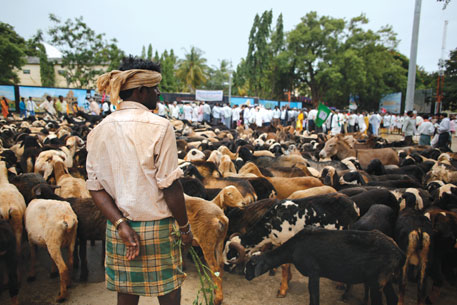 ON JULY 25, the office of the deputy commissioner of Chitradurga district in Karnataka witnessed an unusual protest. About 1,000 people swarmed the office along with 4,000 sheep. The protest was against diversion of about 4,047 hectares (ha) of Amrit Mahal Kaval (traditional grazing land) in Challakere taluk to various scientific and defence research institutes, and industrial and infrastructure projects since 2009.

Challakere grasslands, that spread across 4,856 ha, are the last remaining large contiguous grasslands in the state. There were more than 161,874 ha grasslands before Independence. Now the state is left with only about 18,210 ha. Kaval land was originally for grazing by the drought-tolerant Amrit Mahal breed of cattle owned by the maharajas of Mysore. The breed is wild in appearance and requires large land area for grazing. Its grazing lands are located on biodiversity-rich hillocks, hill slopes and catchment areas of various tanks.

“Considering the importance of the fragile and sensitive ecosystem, the state government designated the land as district forest under the Karnataka Forest Rules, 1969. In 2002, the Karnataka High Court directed the government to protect this land,” says Leo F Saldanha of Bengaluru-based Environmental Support Group (ESG), which filed a case in the National Green Tribunal in February this year.

Who got the grasslands?

Parts of the land have been transferred to Bhabha Atomic Research Centre (BARC) to establish a massive nuclear enrichment centre, the Defence Research Development Organisation (DRDO) to test its drones for civilian and military surveillance, Indian Institute of Science (IISc) to establish a synchrotron and a satellite application centre of Indian Space Research Organisation (ISRO) (see ‘Grasslands diverted’). “All for a paltry payment of Rs 30,000-35,000 per acre (0.4 ha),” states a report prepared by ESG on diversion. 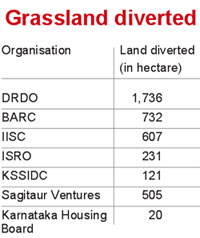 Sagitaur Ventures, real estate developer in the Information & Technology sector, has received 404 ha to establish a solar plant at a ridiculously low lease rent of Rs 45 lakh, ESG states. The Karnataka Housing Board has already constructed villas in the Kaval land.

“None of the developments comply with any statutory clearance requirements under laws that protect grazing pastures, forests, environment, biodiversity and forests rights,” says Saldanha. There are specific high court and Supreme Court directions that such ecologically sensitive ecosystems with rich biodiversity should not be diverted for any purpose without judicial approval, he says. Kaval lands support the critically endangered great Indian bustard, lesser florican, the highly threatened blackbuck and deccan wolf, and a variety of endemic flora, he says.

The diversion has affected people of about 60 villages. The local communities are poor and directly depend on the grasslands for their livelihood. Besides grazing cattle, sheep and buffalloes, they collect firewood, fruits, tubers, medicinal plants and palm leaves for making baskets and mats, and grass for making brooms. Shepherds collect wool and weave blankets. But walls have already been raised, blocking access to the Challakere grasslands. “Ours is a drought-prone area. We can do nothing apart from rearing cattle,” says Meese Mahalingappa, president of Nomadic Shepherds Association. With the fodder prices sky rocketing and access to grasslands cut off, people find it difficult to either maintain or sell livestock, he says.

Karianna, gram panchayat member of Dodda Ullarthi, says local bodies or communities were not consulted before giving away the land. Amlan Aditya Biswas, deputy commissioner of the district when the land was transferred, says the decisions were made with the state Cabinet’s approval. “The land was never categorised as district forest. It falls in the Unassessed Waste Land category and is maintained by the Animal Husbandry department,” he says. “It is government land and has been transferred to prestigious government organisations for public purpose,” he adds.

At present, the case is with the National Green Tribunal (south zone). A two-member expert committee constitued by the tribunal in March this year has submitted its report. The report supports the diversion of grassland. Meanwhile, people have threatened to boycott the coming Lok Sabha elections if the decision is not reversed.