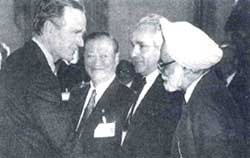 INDIA is lobbying hard and activists are stepping up pressure as the World Bank prepares to take a decision in October on a suggestion to "suspend" but not terminate aid for the Sardar Sarovar Project on the Narmada river. Two Indian delegations visited the US, the UK, Japan, the Netherlands, France and some other European countries and warned of "disastrous consequences" if the Bank withdrew from the project.

The independent Bradford Morse commission had earlier criticised the implementation of the project and had asked the World Bank to hold back financial assistance till a complete review of all its rehabilitation and environmental aspects had been completed. The commission had felt that proper rehabilitation of the affected people would be impossible.

But the partly favourable interim report by the Bank's reappraisal mission, headed by Pamela Cox, could help tilt the balance in favour of the Gujarat, Maharashtra and Madhya Pradesh governments in securing further aid. At least that is what they hope for.

The Cox mission said some measure of rehabilitation and resettlement was possible. It also concluded any delay in completing environment and health-related studies would not result in severe environmental consequences. "With improvements in policies and implementation capacity, the mission believes that successful resettlement and rehabilitation is possible."