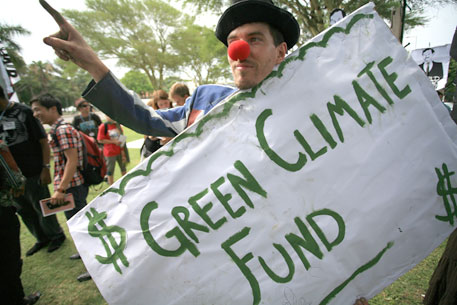 The United Nations is looking at developing countries to raise funds for its Green Climate Fund (GCF). The fund, which aims to raise between $10-15 billion by the end of 2014, was set up to help low-income countries mitigate climate change impacts, transfer technology and develop green economy.

Germany recently pledged $1 billion, South Korea $40m and Indonesia $250,000 while Norway, France and the UK have also promised support. In a statement released to confirm Germany’s pledge, the GCF said it “will also be reaching out to non-traditional contributors, including developing countries and philanthropic institutions”.

“What matters is that we raise as much as possible, as early as possible, with the least strings attached as possible,” said GCF executive director Hela Cheikhrouhou. “During the successful initial resource mobilization meeting in Oslo, Norway, everyone recognized the need to move rapidly to mobilize money. This announcement by the German Chancellor sends an important signal to other world leaders,” she added.

The GCF’s decision to reach out to developing nations is unusual as UN-sponsored climate change negotiations traditionally place the financial burden on countries deemed industrialised in 1992.

As a result, India, China and Brazil declined to attend GCF’s first major meeting last month in Oslo. In fact, India’s environment minister Prakash Javadekar has made it clear that the success of 2015 UN deal in Paris will depend on whether rich countries are able to deliver on their finance pledges.

The two-day Oslo meet was attended by senior officials from 24 developed and developing countries interested in contributing to the fund, and observers. According to the GCF, potential donors will meet again in early September ahead of a UN summit convened by Secretary General Ban Ki-moon, where further financial commitments may be made.

Once the financial target is met, GCF plans to provide grants and loans for projects and programmes to help developing countries boost sustainable development whilst curbing greenhouse gas emissions and adapting to climate change.