Bangalore residents save the god from causing pollution 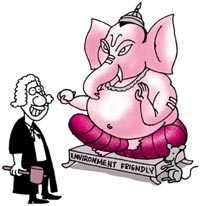 bangalore's lakes were spared the annual deluge of toxic Ganesh idols during this year's Ganesh Utsav, the Hindu festival. Instead of immersing the idols in the lakes, people immersed them in mobile tanks, provided by the Karnataka state pollution control board (kspcb), civic agencies and the Lake Development Authority. Some days ago in Chennai, the Madras High Court had issued an interim order banning the immersion of idols of Ganesh made of plaster of Paris or other chemicals into the sea.

The idea behind the tanks in Bangalore was to introduce people to the concept of immersing the idols at home. "Last year we found traces of lead, arsenic and heavy metals in the waters after the festival. This year we wanted to popularise mobile vans so that by next year we will have people immersing Ganesh idols in a bucket of water in their own homes," said kspcb member secretary Rashmi Mahesh.

The kspcb plied four mobile tanks with an immersion capacity of 2,500 litres and 100 idols to circumnavigate four areas of the city. The water from the mobile tanks would be treated in the board's common effluent treatment plant and used for watering its Urban Eco Park. The Bangalore Development Authority used 25 tanks to protect the Lalbagh Lake while the Bangalore City Corporation plied three tanks to protect Sankey, Ulsoor and Yediyur lakes. It also constructed small water receptacles for the immersions. Around 75 per cent immersions took place in these tanks.

Tests conducted by the kspcb have established the toxicity of painted idols. In its order, the Madras High court also called for using clay idols, sans paints and plaster of Paris, saying this would be in "consonance" with nature. The paints, varnish and other such materials used on the idols have been linked with skin, eye and lung infections.