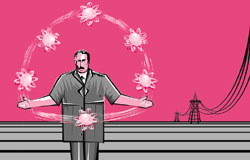 in a recent report, the parliamentary standing committee on energy has observed that stringent environmental regulations hinder the progress of projects conducted by the Union government's Department of Atomic Energy (dae). The report has also emphasised the need to promote nuclear energy.

Critical of strict environmental regulations, the committee reports that the Union ministry of environment and forests (mef) and the state pollution control boards waste enormous time in issuing various clearances to projects. This delay, the panel alleges, results in cost overruns. The Bhimli project in Andhra Pradesh has been cited in the report as a clear instance of rigid environmental regulations jeopardising projects under the dae. It faces a deadlock because of objections by the mef, stating that the area is crucial for the nesting of Olive Ridley turtles.

The government should first evaluate the benefits to be derived from any project in relation to its environmental costs before starting it, says the report. But, a senior official of the mef on condition of anonymity, affirms that the ministry will not compromise and that existing standards will not be relaxed. "As most of the projects were conceived in the late 1980s and early 1990s, they did not undergo the strict scrutiny of the mef. But with the introduction of environmental impact assessment in 1994, there are strict procedures to be adhered to," adds the official.

The committee has asked the dae and the Union government to accord priority to nuclear technology to increase its current power production. It also requires the dae to expeditiously identify various areas to set up nuclear power projects. "These new projects are besides the eight others that are already in progress," reveals Gautam Mukherjee, regional director with Nuclear Power Corporation India Limited in Delhi.

On the committee's plans to increase nuclear energy in India, experts like Praful Bidwai -- veteran journalist and anti-nuclear activist -- lament the fact that despite its dubious track record of accidents around the world, India is still advocating nuclear energy. But designated authorities seem oblivious of such matters. "Since nuclear energy is the only source for large-scale energy deployment, we need to promote it more," points out S B Bhoje, director, Indira Gandhi Centre for Atomic Research (igcar), a branch of dae. Bikash Chowdhary, a member of parliament and as well as that of the standing committee, concurs with him.

Others like D Raghunandan, member of Delhi Science Forum, opine that the issue of safety is sidelined in India as nuclear power establishments are highly secretive.