Vacates stay on payment of compensation to project-affected people in Himachal Pradesh; stay on forestland diversion continues for now 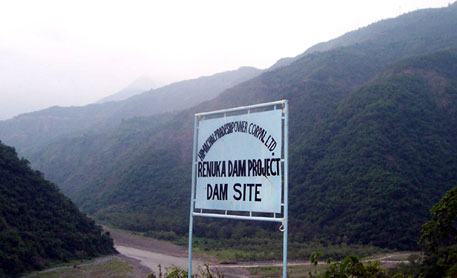 The controversial Renuka Dam project to be built on a tributary of the Yamuna river in Himachal Pradesh has cleared a major hurdle. The National Green Tribunal on July 10 allowed the project developer--Himachal Pradesh Power Corporation Limited (HPPCL)--to go ahead and pay compensation to people whose land is being acquired for the Rs 3,600 crore project. Last year, the tribunal had stalled the project by staying payment of compensation to project-affected people and forest clearance to the project. The tribunal, however, has not vacated the stay on the forest clearance and will hear the matter next on August 14.

About 337 families will be affected by the dam and its reservoir (see Renuka dam will displace villages, submerge forestland). Two villages had been paid compensation when the tribunal gave the stay order, say the petitioners from the affected villages who want the project to be scrapped.

The proposed dam on the Giri river would be meeting the water requirements of Delhi, but questions pertaining to the project's cost sharing between the stakeholders and diversion of forestland are yet to be resolved. “We are going to pay Rs 200 crore in compensation to project-affected families,” says B K Kaushal, general manager of HPPCL. As of now, 90 per cent of the cost of the dam will be borne by the stakeholders, which includes Delhi government, and the rest 10 per cent by Himachal Pradesh. Incidentally, on July 6, in a meeting held in Shimla, chief secretary, Sudripta Roy expressed his concern about the benefits of the dam to the people of Himachal Pradesh. HPPCL officials, however, claim that the issue has been resolved and refused to comment.

The project site is about 1.5 km upstream of Dadahu bridge on Dadahu-Sangra motor road in Sirmaur district. The total agricultural land to be diverted for this project is 1,231 hectares (ha) belonging to 32 villages. The dam and its reservoir will submerge 939 ha of reserved forestland, including 49 ha of the Renuka Wildlife Sanctuary.

The project was challenged in the tribunal by the Renuka Dam Sangharsh Samiti last year. The petitioners have accused the project proponents of not including a large number of trees that will be submerged by the project. “Forest clearance for the project is yet to be granted because of dispute on the counting of standing green trees. We are of the view that there are more than 1.5million trees whereas HPCCL claims approximately 1,70,000 trees stand in the submergence area,” says Guman Singh, coordinator of Himalaya Niti Abhiyan, a Himachal Pradesh-based non-profit.

Singh states that HPCCL has only counted reserved forests and endangered trees. The trees that grow in the commonly owned private land (shamlat) of villages, were not counted. He cites the proceedings of a crucial meeting of Forest Advisory Committee (FAC) which had taken place in Delhi in April 2012. “FAC members took note of the Himachal Pradesh government's classification of shamlat and private forests as forest areas. Then it was decided such areas would be classified as forests under Forest Conservation Act, 1980,” says Singh. Under the Act, such areas would attract forest clearances, he asserts.

The petitioner, Durga Ram Sharma, a project-affected farmer from Mohatu village of Sirmaur district, representing 30 villages, says that even now when Himachal Pradesh asked HPPCL to count the number of trees in the project-affected area, the proponents counted the trees on their own terms. “They are just counting the those trees in the shamlat that are protected under the Indian Forest Act (Schedule 6B),” he says. Even those who have received compensation from the two villages do not reside in these areas but are co-owners of the shamlat land. “They are good returns as these lands are not cultivated,” adds Singh.

Sharma had also stated in his petition that most of the compensation paid by HPPCL or dam promoters were lowest in the state of Himachal. “We learnt through Right To Information appeals that the dam proponents purchased land by paying Rs 6,80,000 per bigha while they are paying compensation for uncultivable land at Rs 60,500 per bigha. When we enquired about the disparities in the land prices, they said that land prices have been stagnant as people hardly buy or sell land. It is not clear to them that nobody wants to sell the land since it is so fertile and lucrative to stay here. The people have not moved from here for last 100 years or so,” adds Sharma.